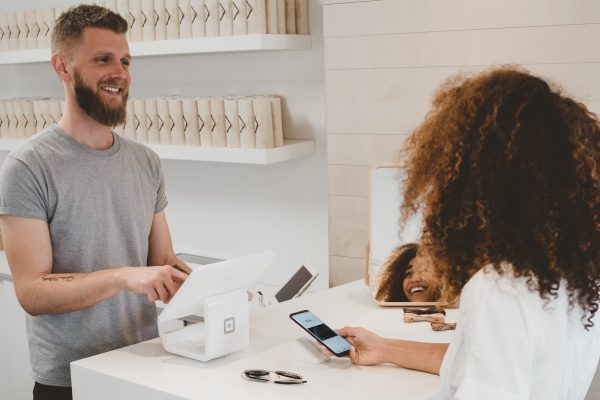 Having the ability to pay for goods or services without your wallet is convenient on its own right. For Samsung smartphone users, they can go to any store to buy goods and pay them with Samsung Pay successfully most of the time. But, how about other Android users? Can they only bite their fingers in jealousy?

Fortunately, there are a bunch of other alternatives on the Play Store that lets you do the same thing. They will most likely share the same functionality, although each of them will have their own unique features that may or may not suitable for certain people. Who knows, Samsung owners themselves may also be hooked in one of these apps once they’ve tried it.

Here are some of the most popular and high rated payment systems. You can say they are the competitors to Samsung Pay.

Google Pay is the perfect replacement for Samsung Pay since it’s developed by the owner of Android OS itself, Google. The app also shares similar functionality. You can book a trip, buy foods & snacks, or buy tickets without having to directly use your cards using NFC, i.e., no need for any contact whatsoever.

Finding nearby supported shops is also possible. You can also use your card’s benefits, if there’s any, without having to use the actual cards such as gift cards or loyalty cards. Security protection is also one of the most important aspects that Google boasted about. Well, at least, it should be comparable to Samsung’s in terms of safety.

One important thing to note is that both apps support different regions. Countries like the US, Canada, Singapore, Australia, and some other regions are supported by both services. As for other countries, you can see a tendency. Samsung Pay generally supports most of the economically crowded Asian countries—except for Japan, surprisingly, while Google Pay focus its platform on European countries and only supports a handful of Asian countries such as India and Japan. To get more details, see the list on Wikipedia for Samsung and Google.

In summary, for those who haven’t be able to use Samsung Pay due to region restriction, you can potentially do so now with another alternative which is Google Pay that shares more or less the same functionality.

PayPal is a little bit different. While we can pay for goods and services using the app, the service is more geared towards users that wish to send & receive money. You can send money to people you know for free if the sender and recipient live in the US, either to PayPal balance or directly to a bank account. Otherwise, if you want to make an online purchase, PayPal offers Purchase Protection to make sure the transaction can be done without any issue.

PayPal can also issue a cash card that lets you transfer money from bank to your PayPal account, access PayPal balance, shop at any stores that accept MasterCard, and withdraw funds from ATMs around the globe. With PayPal, you can also set up a seller account for your business. It supports decent payment processing for large and small purchases so sellers can easily keep track of their sales. PayPal is accessible in more than 200 countries. That way, you can most likely use the service wherever you go.

This particular app is quite popular for companies and freelancers alike. The platform offers users the ability to pay and receive money either locally or globally from business partners, customers, or clients. In a way, it’s very similar to PayPal, although Payoneer is more business-oriented.

To make things easier, Payoneer also provides the user an option to order a prepaid MasterCard that can be used to see the account balance on a certain currency. You can use this card for online purchases, stores, or ATMs that support MasterCard. It’s pretty much the same as the PayPal Cash Card.

With Payoneer, your account may accept multiple currencies including USD, EUR, GBP, and JPY. Furthermore, the service can be used in hundreds of countries, making the service perfect for those who travel a lot.

Some other apps have similar purposes to any one of the services mentioned above. For instance, there is Amazon Payments that offers means to process eCommerce transactions, giving the users identical experience that exists at Amazon.com. There’s also Litecoin that includes online payment in the form of cryptocurrency. Paytm is also a viable choice for folks who live in India or Canada. For iOS users, there’s also Apple Pay, although it’s not available for Android phones.

If needed, you can try each of these apps and see which one is the most suited for your needs.