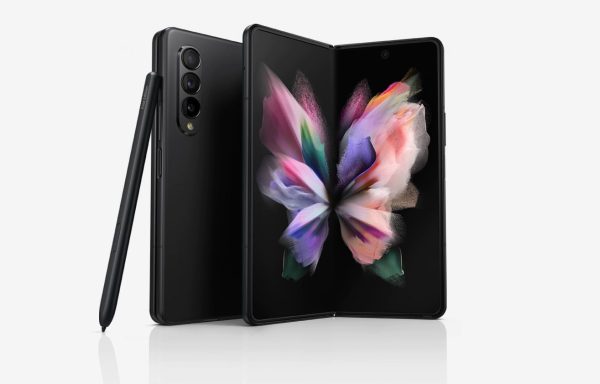 The Samsung Galaxy Z Fold3 5G is the latest iteration of one of the two types of foldable smartphones the company offers. It’s available worldwide for a bit less than it was at release in August 2021.

It’s powered by a Snapdragon 888 CPU and a 4400mAh battery. It has a 120Hz AMOLED foldable screen and a 120HZ AMOLED cover screen.

The Samsung Galaxy Z Fold3 5G has a reasonably sized 4400mAh battery. It can fast-charge at up to 25W, which is enough to charge the battery in 105 minutes. It can also wirelessly charge at up to 11W and reverse charge at 4.5W.

Given the high spec hardware, especially the CPU and large, high refresh rate main screen, the battery capacity may prove to be too small for vaguely heavy use cases. The 25W wired charging is reasonable, certainly enough to top it up throughout the day. It’s worth noting that the total charge time is still a fair bit lower than you might expect given the charge speed and battery capacity. Furthermore, while the phone comes with a USB-C to USB-C cable for charging, it doesn’t actually come with a wall charger brick. The wireless charging is very slow; it would take quite a long time to fully charge the phone that way, though it does somewhat make sense if you plan to simply leave it on a pad or stand most of the day to keep it topped up.

The main screen has a plastic film over it. As with the first generation of foldable phones, it can be easy to assume that this is a long- or short-term screen protector and to therefore assume it is ok to remove it. This is not the case, however. The film is an integral part of the display and attempting to remove it will damage the screen. The exterior cover screen, like the rest of the back, is protected by Gorilla Glass Victus.

The external cover screen offers an excellent use case as a view finder for the main cameras. Using the phone this way allows you to see your photo framing and use the better main cameras. Unlike the Samsung Galaxy Z Flip3 5G, the large secondary screen shows the full image frame preview. This means it can actually help you confidently line up your shot correctly.

The rear cameras are decent but not reasonably what you’d expect to see on a flagship phone. The under-display selfie camera is an exciting choice. The technology is still bleeding edge and has a number of issues. Despite not having a notch or hole-punch in the screen, the camera is still clearly visible as the pixel density over the lens has been significantly reduced to allow enough light through to the sensor. Even with the heavily reduced pixel density and the visual issues that brings, the pixels above the lens still cause visible interference patterns in photos in certain conditions.

More on the Camera

The presence of a telephoto camera is welcome, allowing reasonable levels of zoom with minimal loss of clarity. The 2x optical zoom can be combined with digital zoom up to a total 10x zoom level. As you might expect, any level of digital zoom comes with some loss of clarity. Samsung has managed it quite well though, processing 10x zoom shots enough to be passable though not great.

Video wise, the main wide-angle camera and the 10MP cover screen selfie camera can both shoot at 4K60. The ultrawide and telephoto cameras can both record at 4K too, though they can only reach 30 FPS. The under-display selfie camera can only record at 1080p60 or 1080p30. There are a range of stabilisation options, the wide and telephoto have optical image stabilisation, while the rest are limited to digital stabilization. Super steady mode is available on the wide and ultrawide cameras. However, it does crop the frame to achieve the effect. Slow-motion video can be recorded at 1080p240 or 720p960.

The Samsung Galaxy Z Fold3 5G was released with Android 11 and One UI 3.1.1. However, at the time of writing, it can be updated to Android 12 with One UI 4.1. The One UI Samsung skin is generally well regarded with some but not massive changes from stock Android.

The single most prominent feature of the Samsung Galaxy Z Fold3 5G is the ability to flip the phone open and closed. A lot of research and development budget has gone into making the hinge and screen sturdier. The screen has been rated for up to 200000 folds, that’s enough for more than 130 folds a day over four years, more than 270 folds a day over two years, and almost 550 folds a day over a year. This means, more than ever, that the lifespan of the phone depends on your usage patterns. Heavy usage in one long stint will not affect the screen life as much as opening the phone regularly to check your messages.

Unlike flip-phones of old and the first generation of foldable smartphones, the joint of the phone is actually designed to be pretty stiff. This does make it a little awkward to open with one hand, however, it also means that you can open the phone to 90°, or some other angle, and just leave it there. For example, this could be useful if you’re in a video call and want to set the phone down but don’t have anything to lean it against.

Some apps even allow you to treat the top and bottom half of the phone as separate areas when the phone is opened between 75 and 155 degrees, allowing consumption content such as a video to be placed at the top, with a chat window on the bottom half. However, support for this feature is in its early stages.

There is a fingerprint reader, however, unlike most modern high-end phones, it isn’t embedded under the screen. Instead, it’s a classic side power button/fingerprint reader combo. This makes some sense as the single sensor can be used to unlock the phone when it’s closed, open, or somewhere in between. The phone can also be unlocked with facial recognition, PIN, password, or pattern.

Dual SIM cards are supported, with one nano-SIM and one eSIM. The S-Pen is supported on the main screen, though you will need a new compatible one. The new design has a dampening spring and a softer nib to protect the screen. The phone has an IPX8 ingress protection rating. The “X” means it has no protection rating against dust. The “8”, however, means you can submerge it to a depth of 1.5m of water for up to 30 minutes.

Since the previous generation, the CPU has obviously been upgraded. The screens have also seen some upgrades. The main screen now has a higher peak brightness. The exterior screen has been upgraded to a 120Hz refresh rate. Waterproofing is new, and the entire phone has been reduced in size by a millimetre or two. The official price at release has also been reduced a bit.

The Samsung Galaxy Z Flip3 5G is undoubtedly a high-end phone with a neat party piece. It’s got a lot of processing power, and a great display. The cameras are reasonably strong, though not really flagship quality. However, this shouldn’t be an issue unless you need top of the line cameras on your phone.

A number of the kinks have been worked out of the earliest iterations of foldable phones.  Waterproofing and increased longevity being standout improvements over previous entries in the market. The battery size is reasonable but a little small. However, concerns about the lifespan of the fold in the screen are likely to be difficult to assuage.

The Samsung Galaxy Z Fold3 5G is a strong phone. However, empirically better options are available at lower price points if you’re willing to get a non-foldable phone. The real question is do you really want, or need, a phone that folds? If that’s the case, you’ll have to accept some compromises, at least for the moment. What are your thoughts on the phone? Share your thoughts in the comments below.