Sometimes you can’t help to have a lot of apps on your Android device. You need some to stay in touch with friends while others help you relax after a long day at work. You rule out installing them since you don’t want to part with the anti-stress apps you regularly use.

But since those apps are affecting your device’s battery. Something needs to be done. You can try preventing the apps from running in the background. If you like what you see after giving it a try, you’ll be able to go a little longer without charging your phone.

How to Stop Android Apps from Working in the Background

To stop Android apps from working in the background, you’ll need to go into your device’s Settings. Look for and tap on Apps and notifications. At the top, you’ll see apps you’ve recently opened. If the app you want to stop is not there, tap on the See all X apps. Once you find and open the app, you should see the Force Stop option. Keep in mind that the app will start again once you restart your phone. Unless you want to uninstall the app, you’ll need to stop it again. You can uninstall the app by long-pressing the app icon on your home screen and dragging it to the top, where you’ll see the uninstall option.

If you think that an app you recently installed uses too much battery power, you can try updating the app. Some updates might have a fix so that the app doesn’t consume too much battery. You can also try seeing if there is a system update to install. To check, go to Settings > System > Advanced > System Update. If you’re unsure what apps are running in the background and using more battery power, you can go to Settings > Battery > Usage Details. If you like using options that are hidden in your phone settings, you can also stop apps using developer options. It’s not enabled by default. It’s something that needs to be done manually. Go to Settings > About Phone > Tap on the Build number option seven times to enable developer options. Once it’s on, you’ll see a message letting you know that you’re now a developer. Go to System, followed by Advanced, to show more options, and Developer Options will be right above the System updates option. In Developer Options, look for the Running services option. To find it faster, use the search tool at the top. Once you’ve opened it, you’ll see the apps that are using the most memory and how much. To force stop an app, tap on it and tap on the Stop button. If stopping an app will hurt your device, you’ll see a message letting you know.

How to Put Your Android Device in Battery Saver

To restrict some apps, you can also try putting your Android device in Battery Saver.  You can do this by going to:

Once you’re there, you can turn it on and put it on a schedule. What this does is that your phone will go into Battery Saver once it reaches a battery percentage you set. The Set a schedule option will be at the top. 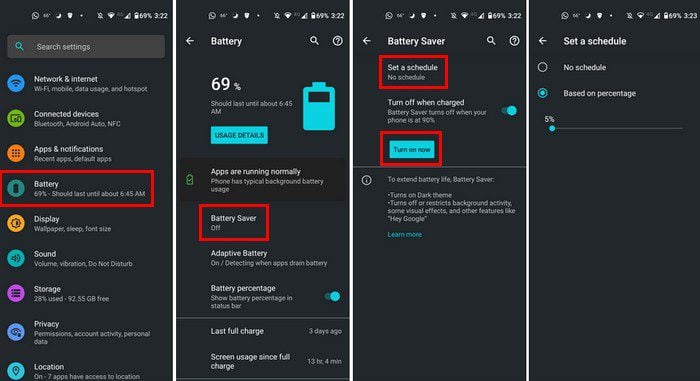 You’d be surprised as to how many apps on your Android device run in the background. The good news is that there are various things you can try to keep those apps under control. You never know if the app you downloaded is a poorly written app that will use a lot of battery power. Which battery-saving method do you think you’re going to try first? Share your thoughts in the comments below, and don’t forget to share the article with others on social media.