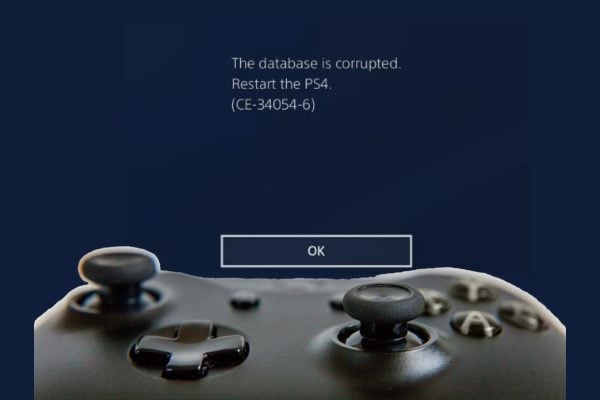 Are you experiencing latency in your PlayStation 4? Does a game take forever to load on your PS4? These are signs of PS4 corrupted data!

Don’t go crazy yet. You can still try some troubleshooting to fix the issue before visiting a Sony PlayStation service center.

Just read how to fix corrupted data on the PS4 guide and follow the steps mentioned below.

What Is PS4 Data Corruption?

PS4 comes with a built-in hard disk drive like the 3.5-inch HDD you might’ve seen in your laptop computer. Some other versions of PS4 may contain SSDs.

Both of these mass storage devices are error-prone since they store media files of massive size that get corrupted easily.

When PS4 can’t run a specific game or play a video, it shows you an error code. Some of these codes are as mentioned below:

What Does Corrupted Data Mean on PS4?

When you get any error message on your PS4 regarding PS4 data corruption or the device is showing telltale signs of corrupted game, media, or system data, it means your PS4 is at risk.

You must stop using the device for high-end gaming at once. Then, troubleshoot the issue by following the steps mentioned below.

If the issue doesn’t occur anymore, you can consider you’ve resolved it and the device is suitable for gaming. If the problem persists, you must contact Sony’s help and support desk by accessing the Support Home portal for Sony PlayStation 4.

How to Fix Corrupted Data on PS4: Restart PS4

Most PS4 corrupted data issues are volatile. It means restarting the device resolves the problem forever. Here is how you can proceed:

If the issue persists after a PS4 reboot, you may want to delete the problematic game or media and then download or install it again from the source. Here is how it’s done:

Copy the content from a new source and try playing it on your PS4.

How to Fix Corrupted Data on PS4: Update PS4

If your PS4 game has a pending update, you may try applying the update as well. Updating the game is effortless when you follow these steps:

How to Fix Corrupted Data on PS4: Restore Licenses

How to Fix Corrupted Data on PS4: Boot Into Safe Mode

If data corruption occurs within the system software, you must reboot the PS4 into Safe Mode and rebuild the internal database. Here’s what you should try:

How to Fix Corrupted Data on PS4: Factory Reset

If the PS4 data corruption is a software-linked issue, like malware or virus infecting the PS4 OS, then factory data reset (Initialize PS4) is the last option. You’ll be wiping out everything on the device and returning it to the state when you buy it new.

Factory reset is an invasive troubleshooting process. Hence, take a backup if needed. But don’t transfer the backup directly to the PS4 once you’ve reset the device.

Also, refrain from attempting this step if you don’t have the latest PS4 operating system copy with you. Because Initialize PS4 option will ask you to enter the OS disc or image so that it can reinstall a fresh PS4 OS.

When you’re ready, follow our extensive guide on how to factory reset PS4.

So, now you know the risks associated with PS4 corrupted data. You’ve also learned how to fix corrupted data on PS4 without breaking the bank.

Don’t hesitate to comment below if you know any other tips and tricks to tackle PS4 data corruption situations.

Next, the best mouse for PlayStation 4 and an alternative to PS4 the Nintendo Switch.