While you were on vacation, you recorded the road all the way up to the cabin. The view was incredible, but your friends might not have an hour to view the entire video. Since you want them to see the entire video, it’s a good idea if you speed it up a little so your friends can see the entire video in half the time. Good thing that there is an app you can try that not only allows you to adjust the video’s speed, but you can also edit it as well.

How to Add Slow-Motion to Any Android Video

A popular app on Google Play that will help you speed up or slow down videos in Fast Motion. When you first open the app, you’ll be asked to trim your video. If that’s something you want to do, make sure that the orange divider line is between the video’s two parts, the part you want to keep and the part you want to erase. You’ll notice how your video will now be divided into two sections; tap on the X of the part you want to remove. The section that remains is the part whose speed you can adjust.

The section of the video that’s in red is the section that’ll fast forward. The section in blue is the part with the slow-motion effect. You can adjust how much of the video will be affected by the speed adjustment. Place your finger on one of the sides of the speeds, and the more red or blue you see means that all of that will have that speed.

You’ll see a number on each part; that’s how fast or slow the video will be played. To change that, tap on the color section, and more speed options will appear on top. 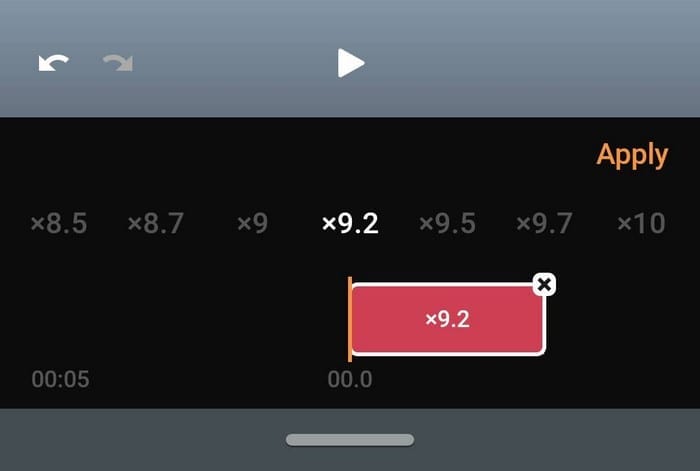 You can choose from video quality such as high, normal, and low. The app will quickly process your video so you can edit it. In the editing section of the app, you can add effects such as filters. There are a large variety of filters to choose from that are divided into sections. You can use filters such as:

You can also do things such as:

The app even has a section where you can choose from a large variety of music. Tap on the music icon and choose to add music you already have on your Android device or from the music the app has to offer. You can choose from music such as Dance, Jazz, Calm, Romantic, Inspiration, Dreaming, Rock, and Epic. The app will only show you four options at first; if you want to see more music options tap on the Expand button.

Tap on the music you want to hear, and if that’s the song you want to add to your video, tap on the Add track option. Tap once to play the song and twice to stop it.

It’s always nice to use an app that can adjust the speed of the video and provide other useful features. This reduces the probability of you having to install yet another app just to do some small editing on your video.

The app has a lot of free options to use, but not all of them are free. To use all the features the app has to offer, you’ll need to upgrade to pro. It will only set you back a dollar a month, three dollars a year, or a one-time purchase of four dollars. By buying the app, you won’t have to deal with watermarks or ads anymore. Do you think you’ll end up buying the app? Let me know in the comments below.