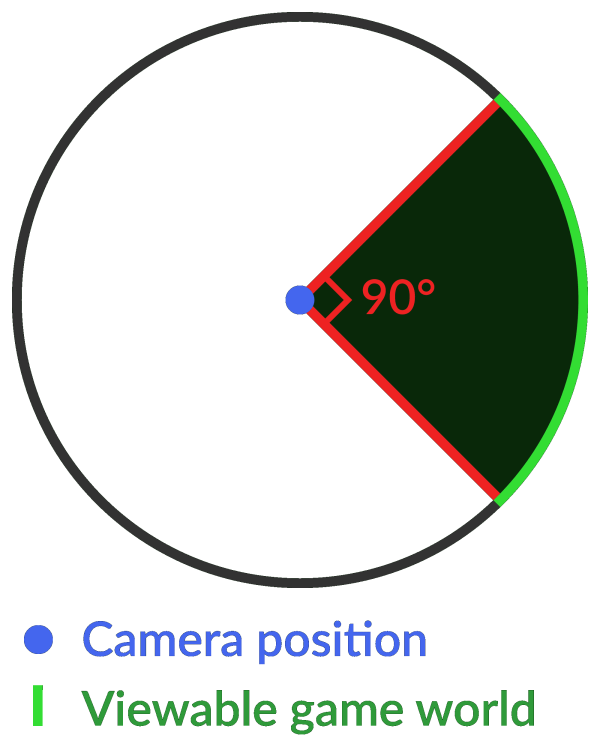 Field of view, or FOV, is a common setting for video games that use first or third person perspectives, although the concept is used in many other applications such as astronomy and photography. FOV typically refers to the amount of horizontal game world that is visible on the screen. It is typically represented as an angle, although some games use unlabeled sliders. For example, if your FOV is set to 90 degrees, then you can see a 90-degree segment of the game.

Differences in field of view

In the real world, the average human can see roughly 170 degrees. Video games are typically displayed on monitors that take up roughly forty degrees of your vision and so generally use a narrower FOV.

Tip: A full circle is made up of 360 degrees, so most people can see almost half of their surroundings.

Console games are typically played on a TV at a distance, with this perspective in mind, console games typically run with a FOV of around 60 degrees. PC games are generally played on a monitor that sits a lot closer to the user. While the monitor may be smaller, it takes up more of your vision because it is so much closer. As such, PC games typically run at a higher FOV, with values of between 90 and 115 degrees being common.

Field of view and motion sickness

Unfortunately for PC gamers, a lot of games are designed for consoles and then ported to PC. This can in some cases mean that the game keeps its 60 degrees FOV. This low FOV when using a PC monitor can cause disorientation, headaches, dizziness, and nausea in some gamers. The range of field of view settings that cause this effect can vary from person to person. The severity of the effect can also vary, from none effect at all, to noticeable symptoms within minutes.

Because of this FOV is one of the most important settings to PC gamers. Having a decent range within which the value can be configured allows people to configure the game to their own personal preferences, but it also allows them to play the game without feeling sick.

A wider FOV offers increased peripheral vision in games. This can help you spot important details that would be missed with a narrower FOV setting. A wide FOV increases the amount of the game world that needs to be rendered, which causes the framerate to decrease under the heavier load.

Tip: Rendering is the process of processing a frame of a game world for display on a monitor.

A narrow FOV can help to make it easier to spot detail in the game and make more precise mouse movements. This is because the narrower view is still being displayed over the same screen width.

Professional gamers often use these sorts of details to get the most advantage they can. For example, in CS:GO, a lot of professional gamers use a narrow FOV and low resolution, to make it easier to spot details and to maximize the framerate. In contrast, Quake professionals often played with a particularly wide FOV to give them maximum situational awareness.