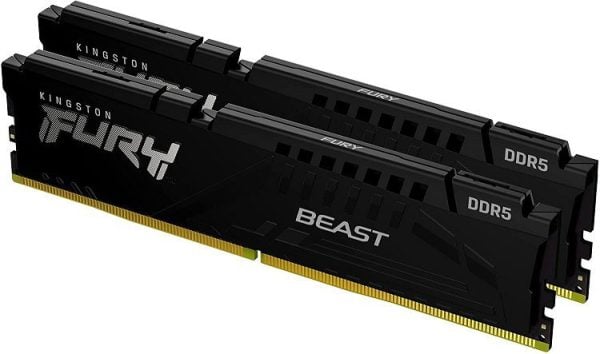 DDR SDRAM or Double Data Rate Synchronous Dynamic Random Access Memory is a rather complicated acronym. It refers to a type of RAM – the type almost always used in modern PC RAM. The RAM part of the acronym refers to the memory type itself. In contrast, the Dynamic part refers to when the memory allocation is done – either at the execution or compile.

For dynamic memory, the allocation happens at runtime. The Synchronous part refers to the RAM syncing with the processor’s clock speed. The DDR refers to a standard of SDRAM that doubles the time (and thus data amounts) the RAM can transport, achieving double the transfer rate compared to regular SDRAM.

Multiple different standards for DDR-SDRAM have been used over the years. The most recent one would be DDR5, which, along with the predecessor that is DDR4, is still widely used in current RAM models available in the market. The different standards aren’t forward or backward compatible. This means that users are forced to stick to the version compatible with their motherboard, for example. Alternatively, it can tell you have to upgrade your RAM, even if you prefer to reuse it.

What Is It Used For?

The primary use of DDR SDRAM is in modern memory modules in PCs and laptops. Low power variants can also be found in mobile devices such as smartphones, tablets, and some thin and light laptops. DDR SDRAM is what you would traditionally call RAM. It stores the used data or is likely to be used by the currently running processes of the computer so that it can be available as soon as possible.

What Are the Advantages and Disadvantages?

DDR SDRAM has low latency and high bandwidth, making it ideal for system RAM, where these qualities can directly influence the system’s performance. The relatively low price, compared to SRAM, makes it affordable in the quantities needed for system RAM. DDR SDRAM performance is directly controlled by a series of timings.

There are standard timings, though some models have overclocked timings for increased performance. It’s even possible to manually adjust these timings to overclock your own RAM. Doing so is complex, however, and runs the risk of damaging your RAM like any other form of overclocking.

DDR SDRAM stands for Double Data Rate Synchronous Dynamic Random Access Memory. Like other forms of RAM, DDR SDRAM is a form of volatile storage, meaning it loses the data it holds when it loses power. The words “double data rate” in the name indicate that this form of DRAM transmits information on both the rising and falling edge of the clock. DDR SDRAM is currently used as system RAM in most devices. Do you think it should be on all? Share your thoughts in the comments below.