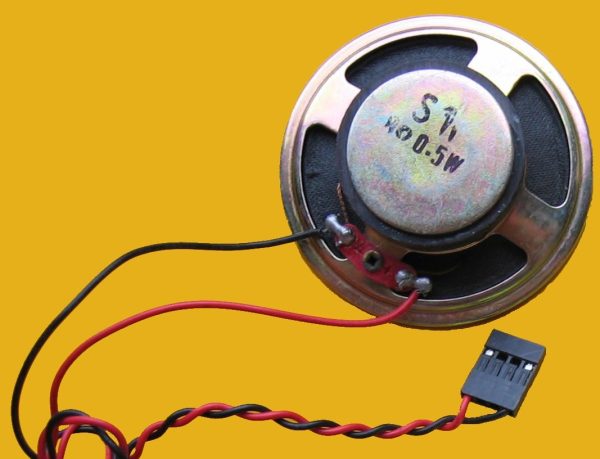 Some computers make a single electrical beep tone when they boot up. This beep used to be very common but has become much less so in modern computers. The beep is generated by the Internal Speaker or PC speaker. The internal speaker was introduced by IBM with its original personal computer in 1981.

It was attached to the motherboard by a pair of short wires but could produce basic sound. Typically this would be limited to tones. This was partly because it couldn’t make good enough audio quality for music or speech. It was also because early software was minimal, and there was no digital music to play.

The primary and original purpose of the internal speaker was to provide auditory “beep codes” during the boot process. This was part of the POST process, an early part of the boot process that verifies that critical hardware is present and functional. At this stage of the boot process, there is no video output as the video driver hasn’t been activated and relies on working RAM. The internal speaker, therefore, plays one of a selection of tones. These tones can be decoded by consulting the motherboard manual to identify the problem. The single short beep was generally indicative of “no problem.” It was hence heard when the computer would – almost always – successfully boot.

Software on the computer was able to access and utilize the internal speaker. This was often used for simple error tones. However, some applications, especially computer games, took this further. By using “pulse width modulation,” it was possible to make the speaker play notes it couldn’t otherwise play. This was utilized to make basic music and even speech. Use in games, however, was limited as the tight time management required was tricky to perform while also processing the game.

There was even a DOS virus that made use of the internal speaker. “Techno,” released in 1993, appended itself to the end of .COM files and had a one in ten chance of activating when the file was opened. If the virus started, it played a techno song and typed the word “TECHNO” to the screen slowly and repeatedly until the screen was filled. Once the screen was filled, the word “Techno” was printed in a large font to the center of the screen. Then after a few seconds, the virus would close, allowing the user to continue using the computer.

The internal speaker was designed to only reproduce square wave signals. The software utilized the speaker because it was directly accessible on an I/O port. It was capable of playing one-bit audio, that is, two possible outputs, tone and no-tone. It was discovered, however, that it was possible to get intermediate tones by carefully timing short pulses too. This “pulse width modulation” is a crude example of a digital to analog converter. Audio quality was generally minimal. This was partly due to the crude techniques, and the speaker lacked a speaker cone, as it didn’t need one to make the intended tones.

As computers advanced and discrete speakers and sound cards became available, the internal speaker lost its use case as a legitimate audio device. This was because it was simply outclassed, though it was never designed to be an actual multipurpose audio device.

Alternative methods for communicating POST error codes were also developed. Many motherboards now feature a pair of seven-segment displays that can display a set of two-digit codes that can be translated visually using the relevant motherboard manual. Some motherboards also use a set of LEDs to indicate components that have passed their POST checks.

The internal speaker, also known as the PC speaker, is a small tone generator integrated into or connected to the motherboard. It’s intended to provide POST debugging tones. However, it is often only heard making a single beep on a successful POST. Most computers now lack an internal speaker by default. However, it is generally still supported with empty headers on the motherboard.