If you were a child of the 80s, you most likely grew up playing cartridge based video game consoles like the Nintendo Entertainment System (NES). Everybody had an NES back in the late 80’s, and like everybody else who owned one, they eventually experienced the same “flashing” problem with the console.

While the practice of blowing NES cartridges is widely accepted as “the fix” for the NES flashing problem, it actually has nothing to do with the problem at all. Blowing into the cartridges doesn’t fix anything. I mean, seriously! How much dust did you think actually got into your game cartridges? Unless you stored your video games in a coal mine, they likely didn’t have enough dust trapped onto the connectors to cause a problem.

So what really causes the flashing issue?

The problem was so common that Nintendo addressed this issue by redesigning the NES where the cartridge would be inserted into the top of the unit rather than the side. This allowed for better contact with the ZIF connector.

So why did everybody think blowing into the cartridge fixed this problem?

It’s just how the brain works. You blew into the cartridge every time you inserted the game. When it worked, you automatically thought it must be because all of the blowing cleared dust from the cartridge. What really happened is you simply realigned the cartridge in a manner that made better contact with the ZIF connector.

I should also mention that there was an entire industry that convinced us that dirty cartridges were a problem. Whenever you went to video game stores like Funcoland or GameStop to purchase a game, the salesman would often try to sell you a cleaning kit. Who didn’t purchase one of these expensive cleaning kits? 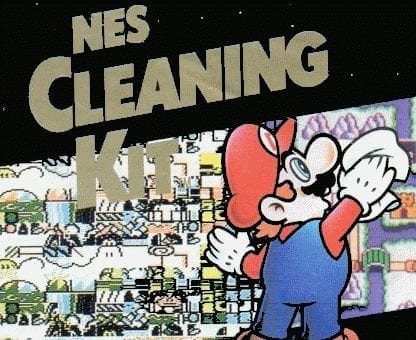 What really fixes the flashing problem?

You can still purchase a new ZIF connector for your old NES system from various sources such as Ebay or Amazon. They are incredibly easy to install. If you have some time on your hands, you could also manually bend the pins back into place. Personally, I opted to replace the ZIF. They are cheap and it took about 10 minutes to install.

So don’t waste your breath if you’re still trying to get that NES game cartridge to function. No need to clean the connectors or use expensive products to make your old system work better. Just make sure your cartridge is making contact proper contact with the cartridge connector and you’re good to go. Happy gaming!