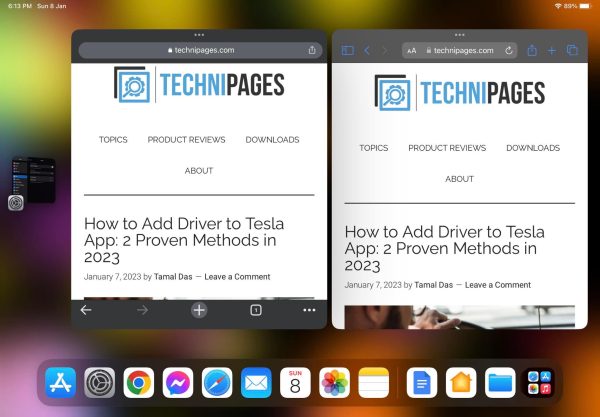 The Stage Manager on iPad takes multitasking to the next level. You can get jobs done faster, easier, and better using Stage Manager and get a feeling of working on a Mac or Windows PC. Want to learn the secrets of iPad Stage Manager? Read on!

Apple has been working on the productivity feature of the iPad for a long time. The results are Split Screen view, Slide Over, App Switcher, and more.

However, with the iPad OS 16.0 launch, it has unveiled a revolutionary multitasking feature for its range of tablet computers, the iPad Stage Manager.

Continue reading to learn everything you need to know for effortless multitasking on iPad using the iPadOS 16 Stage Manager.

What Is Stage Manager on iPad?

Using this multitasking tool on iPad gives you the feeling of organizing application windows on a Mac or Windows PC.

You can drag any open app on the iPad, resize it, place it on top of another open app, dock it on a side panel, get up to four app windows on the screen, and more.

The Stage Manager tool on iPad also lets you resize apps effortlessly. No need to figure out the complex iPad gestures like Split Screen, Slide Over, App Switcher, etc.

If you’re still waiting to upgrade your iPad and asking yourself, “Should I Update My iPad to iOS 16?” you must do it if you use it for professional, work, or business purposes. Because the older iPadOS versions won’t get the Stage Manager tool.

Apple has decided to give access to this iPad multitasking tool only to a few lucky iPad owners who have the following iPad devices:

What Devices Are Compatible With Stage Manager?

Why Don’t I See Stage Manager on My iPad?

Below the above iPad models, unfortunately, the iPad Stage Manager tool won’t be available. There’s a solid reason for that.

Any iPads below the above list don’t come with enough hardware resources like processing power, memory, and complex algorithms that facilitate the flawless functioning of this tool.

In all the above devices, you must run iPadOS 16.0 or later to enjoy multitasking on Stage Manager.

Hence, if you like multitasking on your iPad or it’s a business requirement, this is a sign that you need to upgrade your iPad.

The Notable Features of Stage Manager on iPad

You must learn iPadOS 16 Stage Manager’s current features to utilize this next-generation multitasking tool on a compatible iPad. Though it looks like Apple might be offering new functionalities for Stage Manager with future upgrades, these are all the functionalities so far:

How to Activate Stage Manager on iPad

The iPad Stage Manager feature stays inactive by default when you update to iPadOS 16. Here’s how you can trigger this multitasking tool:

How Do I Enable Stage Manager on iPad?

From the Control Center

Once you’ve entered the landscape mode, follow these steps:

That’s it! Once you activate this feature, you won’t see immediate changes on the Home Screen. Open any app, and the Home Screen will show the following elements:

You can hide the Recent Apps and App Dock if you need more real estate on the screen. Here’s how you can turn these elements off:

From the Settings app

Usually, the iPadOS 16 Stage Manager button, by default, shows up on the Control Center. But if you don’t see it while using a compatible iPad, don’t panic yet. Try these steps instead:

How to Deactivate Stage Manager on iPad

You can deactivate this feature from the Control Center or the Settings app. Just follow the steps mentioned above.

For instance, try these:

How to Move Apps to External Display on Stage Manager

You must upgrade your iPad to iPadOS 16.2 and use any of the below-mentioned iPad models to send app windows to an external display:

To move an app or app window to the additional display, try any of the following:

With an added display, you can open up to eight app windows using the Stage Manager on iPad.

This is an excellent addition to the iPadOS 16 software upgrade. However, there are some limitations, as mentioned below:

The best advantage of iPadOS 16 Stage Manager is you can experience more convenience when using the iPad like a computer. So far, you can connect a Magic Keyboard and external display to the iPad.

Now, on Stage Manager-compatible iPads, you can move app windows to the additional display using the trackpad of the Magic Keyboard or a wireless mouse.

Also, you can drag and drop app windows like a Mac or Windows PC. Furthermore, you can use a mouse click to resize the iPad app windows when working in the Stage Manager mode.

Since the latest iPads come with some solid hardware configuration, you won’t feel any latency when you work simultaneously on four open apps.

So far, you’ve unlocked the secrets of one of the major feature inclusions of the iPadOS 16 upgrade, the iPad Stage Manager.

You’ve found out its functionalities, features, and user interface (UI) elements to navigate around this great multitasking tool from Apple.

You must try Stage Manager on your iPad if you need to work on multiple iPad apps to complete your tasks at home, school, office, or business sites.

Don’t forget to leave a comment below about your experience of using this multitasking tool. Also, mention tips and tricks you’ve discovered while using iPad Stage Manager.

Next up, learn to set up Split Screen on iPad and connect iPad Trackpad Keyboards to boost multitasking effort on iPads.