It’s time to charge your phone, so you connect it to a power source like you usually do. You come back after a while thinking it’s almost done, only to see it’s barely charged or even notice that the power has drained. Various factors can contribute to the issue. Maybe by changing some habits, your Android device can charge as fast as it did before. Keep reading to see if the fix for your device is included.

Why Is My Android Device Charging So Slowly?

It can be frustrating when you need to charge your device in a hurry, only to see that it is barely charged. But do you leave your phone alone when you charge it or are you constantly checking your messages? If you’re always using your phone, even when it charges, it will use the power to keep your device running so you can continue to use it. So don’t be surprised if little power will charge your Android device.

You can try charging your phone far from your desk. That way, it’s not close, so you’re tempted to grab it. Sometimes the idea of having to get up will discourage you from wanting to look at your phone.

The Battery Has Degraded

If your Android’s battery is two to three years old or has had 300-500 charging cycles, maybe it’s time to say goodbye. If you think this applies to you, the battery will be affected by about 20%. It all depends on how nice you’ve been to your Android device. Your phone will show signs that the battery is dying. For example, you’ll notice that the device is performing slowly and that the apps don’t respond as well as they used to.

Other signs to look out for include the following:

You have an app for almost everything you might need. But, when you have so many apps on your device, they will all use power to keep themselves up and running, resulting in your Android device not charging fast enough since they will continue to run in the background.

Look through your installed apps and remove the ones you haven’t used in a long time. If you ever need to use it in the future, it’ll be waiting for you in Google Play. Even if they are paid apps you don’t use anymore, it’s a good idea to uninstall them. Removing them doesn’t mean you’re not subscribed anymore. You can always re-install and log in, and your subscription will remain. Google Play sends a notification that even if you uninstall the app, you are still a subscriber.

Be careful with Rogue Apps as well. These apps are designed to fool you into thinking they are trusted brands. Their goal is to gain unauthorized access to commit fraudulent transactions. These are the kind of apps that will install ransomware and malware or trick you into giving them money.

Do you want to see what apps are taking up the most battery? You can check by going to Settings > Battery > Battery Usage. 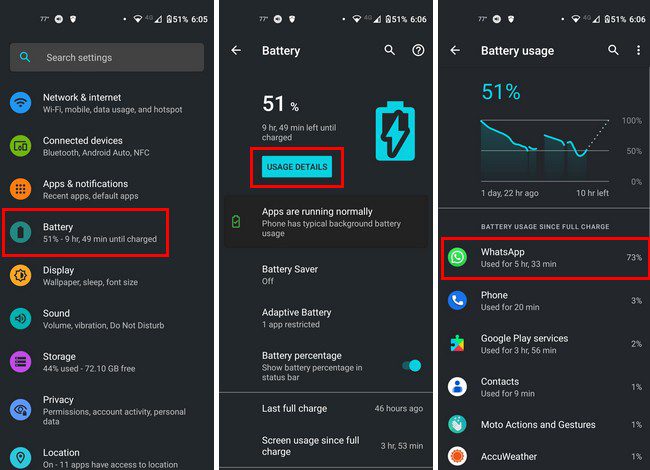 In my case, the number one culprit in draining my battery is WhatsApp. After selecting it, I changed the Background restriction to Restricted and the Battery Optimization to All apps. 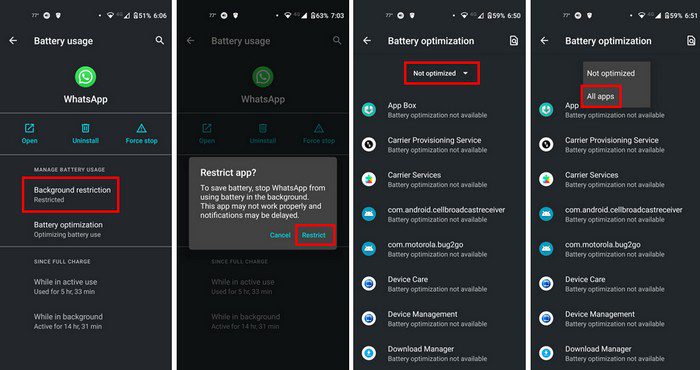 When you select this last option, it will be set at Not optimized, but tap on the dropdown menu and choose all apps.

Are you Using the Right Cable?

The slow charging could also be because of a faulty charging cable. If you’re using an older adapter even after getting a new phone, that could be why your Android is charging slowly. Try getting the original cable that came with your Android device. Even after all the mistreatment, a cable can go through, it can still charge a device. But the charging speed will be affected. You can also try replacing the power brick to see if that’s what’s causing your slow charging. It’s the piece of hardware that connects the wire to the power source. 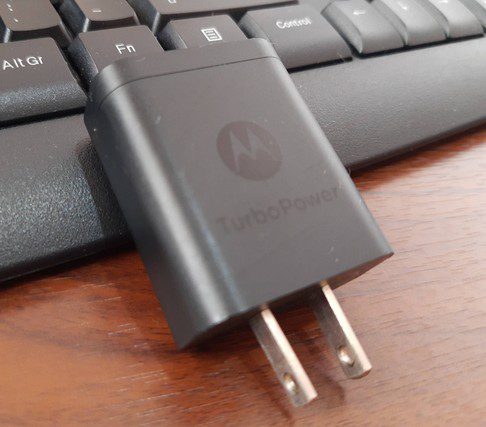 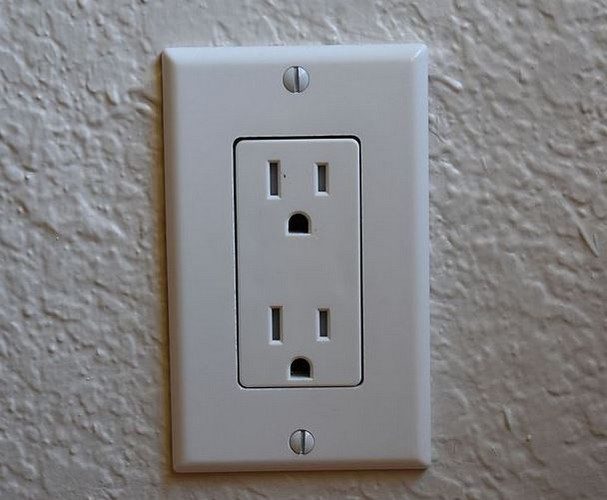 You could try replacing it or maybe switch to another power source. You could also see a slow charging warning only on your device if the power source you’re using is your laptop, car, or battery bank. There is always the option of switching from wireless charging to cable. With wireless charging, you don’t have to deal with cables, but the charging is slower. 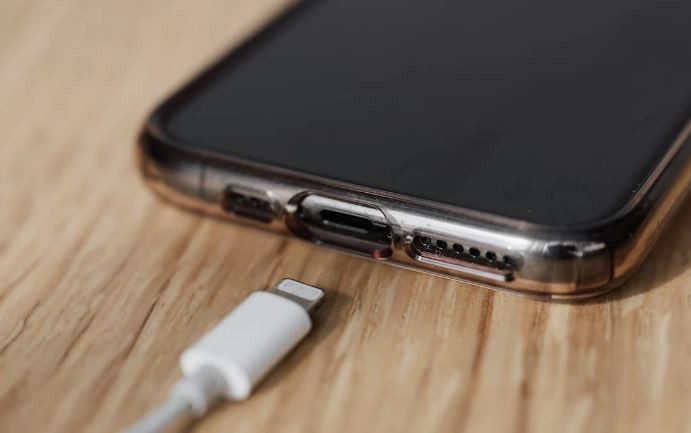 Are you sure that your charging port is not damaged? You’d be surprised by how much dust can get in there and how easily the charging port can get damaged if one is not careful. Try using a plastic toothpick to carefully remove anything that might be in there that shouldn’t be.

No device is going to last forever. Maybe its time has come to move on as a nice paperweight. There will come a time that no matter how many tips you try, it can’t be fixed. Now is the perfect excuse to get that new Android you’ve been looking at.

It’s annoying to have to deal with this type of issue since there is always something more important to deal with. You might need to be patient and try one tip at a time to see which one works best for you since every situation is different. But there will come a time when it’s time to get a new device. How severe is your charging issue? Share your thoughts in the comments below, and don’t forget to share the article with others on social media.