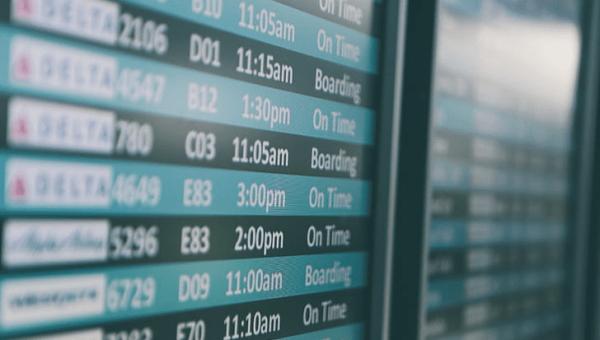 If you’re trying to pick someone up from an airport, you generally don’t want to be waiting around for ages. One of the risks of air travel is that there can often be delays. Sometimes delays are short, other times flights can be delayed multiple hours or even cancelled. To reduce the risk of you arriving at the airport to pick someone up only to find that their plane was delayed or cancelled you may want to see the latest flight details.

There are generally four ways to work out when a flight should land. First, you can just trust that the flight will be on time. This is the riskiest approach as, without any other information, you’ll be unaware of any delays. Second, you can get the person you’re going to meet to inform you when they’re getting ready for take-off. This method is pretty decent as you can just add the delay from the expected take-off time to the expected landing time and get a roughly accurate result. This method doesn’t keep you updated about any possible in-flight arrival time changes, such as headwinds, tailwinds, or even the flight being redirected.

There are two types of information sources that can keep you updated as to the flight’s progress, throughout its duration, the destination airport’s website, and flight tracker services. Many airports publish a list of their departing and arriving flights. This data will generally be updated at the same time that the departures and arrivals boards in the airport are updated. With this method, you don’t necessarily need to know the actual flight number, as long as you know where the plane took off from, and when it was supposed to arrive, it should be easy enough to work out which flight it is and when it is predicted to arrive.

The most accurate and up to date data you can see on when a flight is going to arrive is through flight tracker websites such as FlightRadar24 and FlightAware. Flight tracker sites use live data from air traffic control systems such as radar and satellites to monitor the live location of thousands of aircraft. With these sites, you can track the plane’s live position as it is in the air. They also provide data such as scheduled departure and arrival times, as well as actual departure time and predicted arrival time. This detailed data can allow you to plan exactly when to arrive at the airport even if the plane is running early or late.