The more followers you have on Twitter, the better, right? But sometimes, you get followers you would rather avoid. The good news is that you don’t have to resort to blocking that person to get rid of them as a follower.

Even if you’re new to Twitter, you’ll see how easy it is to remove someone you don’t want to have as a follower. Even if you’re in a hurry, you’ll still have time to do this since it can be done quickly.

How to Dismiss a Follower on Twitter Without Blocking Them

Not too long ago, Twitter finally made it possible for its users to eliminate all the followers they want without blocking them. To do this, click on the Profile option to the left. Right below the date you joined, you’ll see how many followers you have; click on that. You’ll see the list of followers you have. 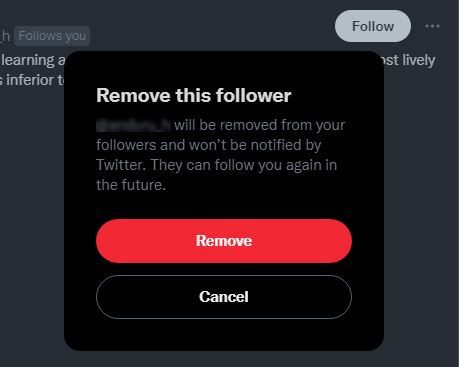 To the right of each follower, you’ll see three dots you’ll need to click on. The third option from the list will be the Remove, this follower. Don’t worry about the person getting notified of the removal because they won’t get any notice.

What Happens When You Remove a Follower on Twitter

One thing you might be worried about when removing a follower on Twitter is if the other person will get a notice. You can relax knowing that Twitter does not let the removed follower know they are no longer following you.

The blocked person will no longer see your tweets on their feed, but if they see that they are no longer following you, they can click on the Follow button again. That’s why it’s a good idea to think if you want to remove the person as a follower or you want to block them altogether.

Twitter is also working on allowing users to temporarily block other users’ accounts for seven days. Also, Twitter will give the user a warning if they participate in a conversation that could get heated.

Little by little, Twitter is adding features that make the social media platform more attractive. Twitter has already announced that more features are don’t the way. What other features would you add to Twitter that would make it the best social media platform out there? Share your thoughts in the comments below, and don’t forget to share the article with others on social media.