If you’re wanting to watch a video or film on your TV but it doesn’t have the right streaming app, and you don’t have a long enough HDMI cable, you may feel like you’re out of luck. If you’ve got a Chromecast, or a TV with Chromecast built in, however, you can cast a tab from Chrome, a video file, or your entire computer screen to another device on your network.

Note: Chrome used to support casting to Fire TV, Roku, and Miracast devices. That capability has been removed by Google. A Chromecast or a TV with Chromecast built-in is now required to use this feature.

Casting a Chrome tab is relatively processor intensive, as a minimum you need an Intel i3 or equivalent CPU running Windows 7. For Mac, you need at least a MacBook pro 2010 running OS X 10.9.

All Chrome books from 2014 and later, support casting a Chrome tab, 2013 Haswell based models and the Samsung Chromebook 2 also support casting Chrome tabs. Results on Linux vary with distribution, drivers, and desktop environment, but it’s advised that you exceed the minimum system requirements for Windows.

All platforms need at least a GPU equivalent to the Intel 3000 integrated graphics chip. All devices need to be connected to the same network to be able to work

To cast a tab from Chrome, you need to click the triple-dot icon in the top-right of the window, then select “Cast” from the drop-down list.

A small popup will appear in the top-right with a list of available devices. You just need to click on any device on the list to start casting to it.

Tip: When casting a tab, you can see the tab on both devices, however, audio from the tab being cast will only play on the remote device.

To stop casting a tab, click the previously mentioned blue icon in the extensions bar, then click on the device you’re casting to. The disconnection process should be almost instant. 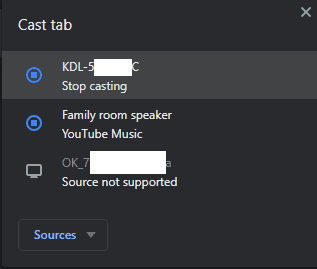 You can also choose to cast your desktop, or an audio or video file saved to your computer. To do so, select what type of media you want to cast from the “Sources” drop-down box in the list of devices you can cast to. 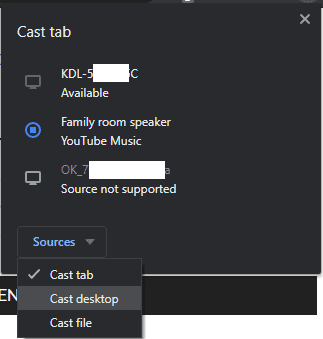