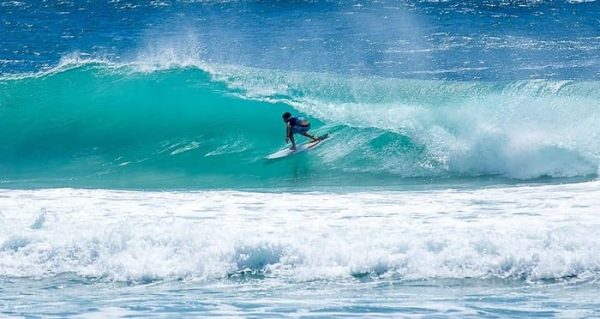 If Chrome can have its own hidden game, why not Microsoft Edge, right? With Edge’s secret game, you won’t be a dinosaur, but an actual person. This game is easy to play, has more play options, and is a game that will keep you entertained until your Internet connection comes back.

But, if you want to play the game even when you do have an Internet connection, you can. Unlike the Chrome game, Edge’s surf game gives you more options when choosing your surfer. It’s not going to replace your Playstation games, but a decent option while you wait.

How to Access and Play Microsoft Edge’s Hidden Surf Game

To access Edge secret surf game, type edge://surf. As soon as you access the main page, you’ll see a row of male and female surfers. Use the right and left arrow keys to move between the surfers. When you stop moving, the surfer that moves to the sides is the one you’ve selected.

When you’re sure of the surfer, you want to use tap on the spacebar to start playing the game. At the beginning of the game, your surfer will start off slow with obstacles such as mini-piers, rocks, buoys, rocks, among other things. So you should start off as slow as possible.

When you first start off, you’ll also see lightning symbols. Make sure to pass on top of one since this is going to give you the extra speed you’ll need to get away from the Kraken.

Make sure to be careful with other surfers in the area because if they touch you, they will take one of your three available lives. Whenever you want to use the super speed, you got at the beginning of the game, press the F key.

At the top of the display, the distance your surfer has traveled will be shown. The goal of the game is to travel as far as you can. Besides having to be careful with the obstacles and other surfers, stay away from the Kraken. It will start to chase you, and before considering using your super-speed, try pressing the down key to escape.

You can also control your surfer with your touchpad, Xbox one controller, joysticks, d-pad, or mouse. For easier control, it’s best to use your mouse, the surfer responder better with the mouse than with the keyboard keys. By moving your cursor up, it’ll make the sure kneel down and to resume move the cursor in the direction you want to go.

How to Play Different Modes of the Microsoft Edge Surf Game

If you want to try something new, the Surf game offers different modes for you to play. At the very beginning, before you press the spacebar to begin, click on the three menu lines. There, you’ll see a dropdown menu where you can choose what mode of the game to play. You can choose between Zig Zag, Time Trial, and Let’s Surf.

The Let’s Surf mode lets you surf as long as you can stay alive, and your main goal is to get as far as you can. With the Time Trial mode, you need to get to the island with the treasure as soon as you can. Finally, with the Zig Zag mode, your goal here is to go through as many gates as possible. At the top, you’ll see how many gates you’ve managed to get through. 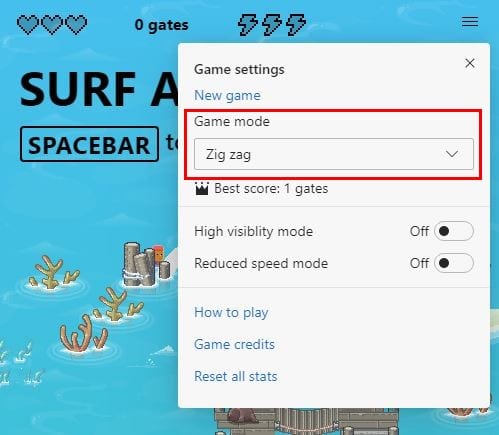 You can also toggle on the Reduced speed mode and the High visibility mode. With the first option, all the obstacles and aids will be highlighted in squares so you can easily avoid them. All the coins and help will be in green, and what you need to avoid will be in red.

The Reduced speed mode will do just what the name says. If you want to get the hang of the game and learn where everything is first, this is an option to turn on. It’ll slow down your surfer even more.

If you can’t remember what you need to press to play, click o the menu lines at the beginning and click How to Play. A window will appear with the controls you can use and what they are for. 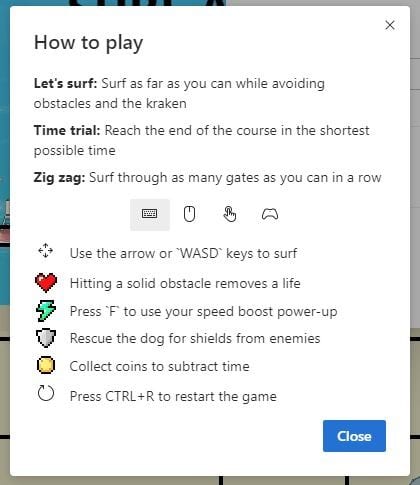 As you can see, there’s a lot to this game than in Chrome’s Dino game. You can choose from three different ways to play the game.