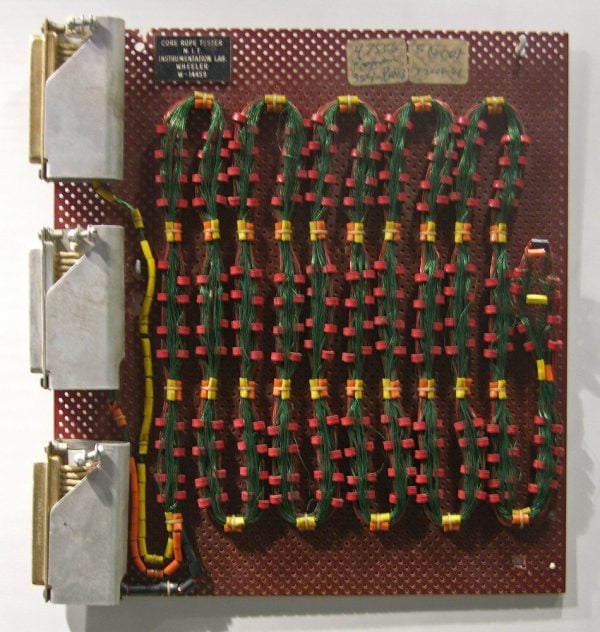 Core Rope Memory, also known as woven wire transformer ROM was a form of Read Only Memory, or ROM. It wasn’t mainly used in commercial environments due to high production costs, amongst other factors. It was, however, incredibly reliable, even in challenging environments. This led to its use in several NASA projects, including, most famously, the Apollo moon landers and orbiters. Both core rope memory and magnetic core memory were used in the AGC or Apollo Guidance Computer. Core rope memory should not be confused with magnetic core memory, a form of RAM.

How Does It Work?

Core Rope Memory has a similar structure to core memory, at least at first glance. They both use a series of wires and metal cores. The wiring concept, though, is incredibly different. In core memory, each core stores a single bit of data in its magnetic field. The RAM is built up by having an array of those cores and wires going through them to charge them and sense their charge. In core rope memory, data isn’t encoded in the core’s magnetic field. Instead, it’s encoded by whether or not the sense wire runs through or around the core.

Another significant difference in core rope memory is that multiple sense wires can run through each core. This allows various bits to be stored per core, significantly increasing the storage density. The Apollo guidance computer used 16-bit words and stored 12 words in every core, which meant that each core stored 192 bits of data.

How Was It Made?

Core memory is difficult to make. As the data is encoded through a wire either going through or around a core, it must be woven. In the 1960s, this process was done by hand. Most of the workforce weaving the core rope memory for the Apollo guidance computer were women. They were hired primarily from the local textile industry for the sewing skills, though some also came from a watchmaker.

One of the significant issues faced was that the software you installed on the core rope memory was a physical part of its very complex structure. You couldn’t just install a software update if you found a bug. Once a rope was complete, it couldn’t be changed at all. This meant that software had to be designed to have no faults or bugs, as they couldn’t be fixed further down the line. Early models for the Apollo guidance computer were threaded entirely by hand, but this process proved to be error-prone. The process was updated to include a machine that selected where to thread the wire but left that process down to a person.

This inability to provide software updates was difficult enough for most software to deal with. However, this was already a necessary factor for spacecraft, especially manned craft, as any error could result in the loss of an expensive spacecraft and potentially human life. The cost of manufacture, however, was a bigger problem though. It was just too costly to make, even if it did offer excellent storage density for the time. As such, while successful in its use cases, the technology never took off commercially, though it did see some limited use.

Core Rope Memory is a form of Read Only Memory, or ROM. It is not to be confused with the similarly named core memory in the form of Random Access Memory or RAM. Core rope memory worked by weaving many sense wires through or around several cores.

The coding of a bit was determined by the wire going through or around a particular core. It needed to be woven by hand, making manufacturing time-consuming, expensive, and error-prone. This factor limited broader interest in the technology. However, the reliability of tested modules, even in adverse environments, made it suitable for use in space vehicles, most notably in the Apollo guidance computer.