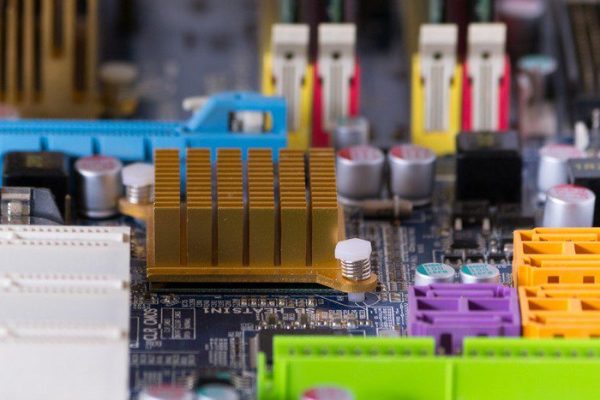 Heat generation is an issue that affects a lot of modern technology. Historically, many things simply haven’t produced enough heat for it to be an issue to get rid of. The story is different with modern microelectronics, though. Heat production is a real issue that limits performance. One key to continuing to increase performance is to improve cooling solutions.

The main goal in cooling is to reduce the temperature of the thing being cooled. To do that, the heat must be transferred elsewhere, as demanded by the second law of thermodynamics. A fairly big problem, however, is that microelectronics, as the name suggests, tend to be small, and it is hard to cool small things.

The cooling ability is critically dependent on three key factors: the ability to transfer heat, the sheer mass of the cooler, and the surface area. All three of these have different and vital effects.

To make an efficient cooler, you must use a material that can conduct heat effectively. Metal is a fantastic conductor of heat. Metal things can heat up quickly and cool down quickly. Both happen because metal is excellent at conducting heat. An easy way to see this is to hold one end of a metal spoon under the hot water tap while holding the other end. Fairly quickly, you’ll start to feel the handle of the spoon heat up as the heat is transferred along the handle. You can observe the same in reverse by holding the same spoon under the cold tap.

Mass is essential for cooling because a large amount of metal can absorb more heat than a small amount. This is the same reason it takes longer to boil a pot that you put more water in. There’s more water – or metal in this case – to heat up. Critically though, the end goal isn’t to heat up the heat sink. It’s to heat up the air around the heatsink because the air can quickly move away. The fact that the air can flow due to convection carrying the heat with it is critical to carrying heat away from the system. Thankfully, there’s a lot of air in the atmosphere to heat.

So why use metal? Why not just heat the air directly? As we mentioned earlier, it’s hard to cool small things because not much air can touch them to transfer the heat away. To increase the amount of air that can be heated simultaneously, you need to increase the surface area.

The surface area is vital for the efficient transfer of heat. The most comparable example is trying to dry clothes. While a T-shirt can dry when crumpled into a ball, if you hang it up neatly and spread it out as much as possible, it’ll dry quicker. You could just heat a big chunk of metal, but it wouldn’t be that effective at getting rid of that heat. It may even be too slow and continue to heat up until, eventually, it causes the thing you’re trying to cool to overheat. To get around this, you need to increase the surface area of your chunk of metal.

While you can make a lot of surface area by creating a large, flat metal sheet, you can also be smarter about it. By cutting that large flat sheet of metal into more miniature sheets and stacking them on top of each other, you can have the same surface area in a much smaller space. The heat sinks you see in computers, and even the radiators in cars all have lots of thin layers. Each sheet has a reasonably small surface area but combined, there’s a lot of surface area and thus cooling power. Some heatsinks or radiators may even have small fins between the layers to increase the surface area within the same overall volume.

Combining all three of these factors is critical to making a good cooler. You want as large a heat sink as possible, with as much surface area as possible, made of a metal that’s good at conducting heat.

To minimize the overall space, you could make the flat sheets of metal in your cooler as close together as possible. This, however, makes it hard for air to flow over the surface you want to cool. You need that airflow to carry the heat away. Without a fan pushing air through small gaps, you must leave relatively large gaps in passive heat sinks for optimal cooling. You also need to align your sheets so that air in your cooler can rise due to convection. Hot air rises carry the newly heated air up and out of the heat sink to replace cooler air from below. In any passive heat sink, the metal fins should be vertical or near vertical so the heated air can arise naturally due to convection.

The final important thing for a passive heat sink is that it needs to be placed in relatively cool air. Heat only transfers from hot items to cold things. The speed at which it does so depends on the temperature difference between the two. If you can avoid heating up the air around a passive heat sink, you should.

A passive heat sink is an object to which heat is transferred that is only cooled by natural means. Generally. this is by it heating air, and the hot air rising away. The process, however, can work in water and other liquids and gasses that conduct heat and flow easily. Passive heat sinks are generally large and have a lot of surface area.

Passive heat sinks tend to have relatively large gaps between fins compared to active heat sinks to provide enough space for smooth airflow. Fins are almost always placed vertically or nearly vertical so that convection naturally causes the heated air to rise out of the heat sink. For a given heat source, a passive cooler will be larger, potentially significantly so, than an active heat sink, as the flow of air carrying the heat away is reduced considerably. The main benefit is that passive heat sinks are silent and have no moving parts.