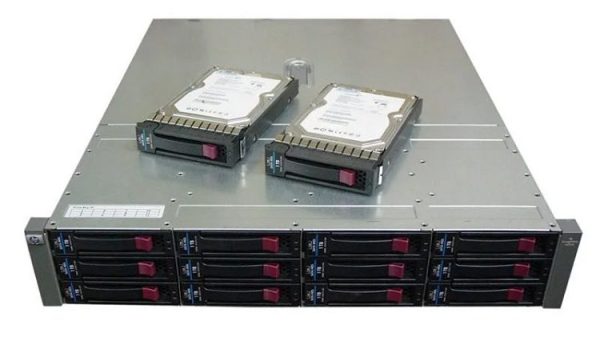 In computing, a server is a computer that constantly runs. Serving whatever content and functionality it has been configured to perform. A classic example of this is a web server, which helps web pages that can vary depending on the user’s request. Servers can host any application that works on the server-client model. Online video games are another excellent example. A physical server runs the game server application for users to connect to.

Note: Both the physical hardware used as servers and the software that runs on them for users to connect are referred to as servers.

One of the issues that servers, as well as most other enterprise-grade computer hardware, have to deal with is high levels of specialization. Enterprise networking hardware, such as routers, switches, servers, etc., is all relatively space limited. These machines are designed to fit into server racks. Typically taking up one to four “U” of the height of a 48U 7-foot-tall server rack.

Note: A “U” is a standard unit of height for computer hardware designed to fit in server racks.

Not only do servers have limited space, but they also have limited cooling capacity and power limits. These restrictions mean that server hardware is designed to be as efficient as possible through specialization. Unfortunately, this means there is limited space for other hardware, such as hard drives. Hard drives are necessary to hold the operating system and run the server. Still, they’re also required to keep the vast store of data that the server may need to serve and the data it collects.

Servers have some built-in and sometimes expandable storage. But this isn’t enough space for modern server needs. Additionally, many servers are not a single server but multiple servers acting behind a load balancer that helps to ensure that no one server gets overloaded. If you stored the actual data that the application runs on each server, you’d have a massive data duplication issue.

Another type of specialized hardware is used to get around all of these issues, the disk server. The disk server is designed to fit in a standard server rack and hold as many hard drives as possible. A disk server will also be kitted out with enterprise-grade connectivity so that data can be provided to the actual server as quickly as possible. In most cases, a RAID array will be used to provide some level of resilience to drive failure. And potentially a performance improvement, depending on the array’s configuration.

In a home environment, the NAS server is essentially the same as a disk server. A NAS server provides network connectivity for a (smaller) number of hard drives allowing other computers on the same network to access that data. There are some differences, though. Most NASs can also run some low-end server functionality directly as they need to be less specialized than their data center cousins.

A disk server is a specialized computer device that holds as many hard drives as possible. It then provides access to the storage of these hard drives to configured devices, typically exclusively servers. In the home environment, the closest thing to a disk server is a NAS which offers most of the same functionality and some extra because of the reduced need for specialization. Both disk servers and NASs are designed to provide a high density of storage space to other devices on the network.