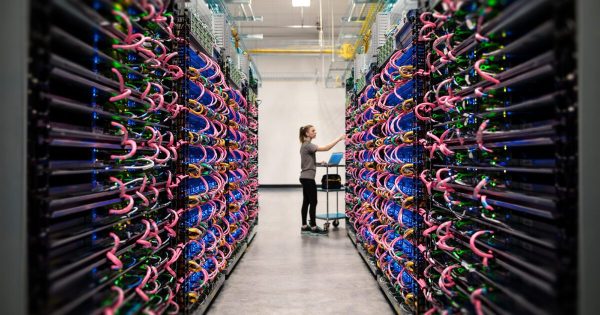 While your requirements for a home or work computer might seem reasonable. Or even high-end, depending on your use case, it simply doesn’t compare to the processing power and storage capacity needed by large companies. Even a reasonably sized company will have data storage requirements in the dozens to hundreds of terabytes.

Rather than only distributing this data across end-user devices that may or not be turned off or disconnected from the network, most data is stored in a centralized environment. In smaller environments, this may be a server room. Still, they are referred to as data centers when capacity needs to scale higher than a small room.

What Are the Purposes and the Advantages of a Data Center?

A data center is intended to be a consistently available centralized data store. Because the storage and usage requirements of networking equipment and servers are essentially the same as the disk servers containing the raw data, this hardware is usually grouped together.

Grouping together the core network infrastructure makes performing several core tasks significantly easier and more efficient. One core factor is connectivity. With all the servers, data, and network infrastructure in one place, it’s comparatively simple to connect them all together efficiently. Latency and bandwidth are easier to optimize over short distances, allowing maximum network performance. As an added bonus, cable runs are shorter and therefore cheaper than they would be if all of the hardware was more distributed.

The core computing hardware also needs external infrastructure to facilitate its safe and continuous operation. Reliable power, cooling, connectivity, and safety systems are all expensive. They are, however, more expensive if you have to duplicate them rather than simply have a single large set-up.

What Does a Data Center Require?

The core part of any data center is the actual computing hardware. This typically comes in the form of server racks. Each rack is a standard size and can take multiple standard-sized computing devices. The actual devices are usually described in sizes of “U,” with a “U” simply being a standard height unit. Most server racks are 42 or 48U high, with 48U racks also called seven-foot racks. While some computer hardware does come in 1U sizes, most devices are 2U or 3U, though some can be much taller than that.

The data in the data center needs to be accessible, generally constantly. For this reason, high-speed networking both internally and to the outside world is expected. Additionally, data centers are designed with backup and redundant systems to provide continuity in the case of most reasonable incidents.

If one device fails, data centers are designed to have redundant servers, storage, and network hardware. Its functionality can instantly be picked up by a secondary device. The power supply also has a series of backups, including Uninterruptible Power Supplies or UPSs. This provides enough power to continue running the devices until local generators kick in, in the event of a power cut.

Like all computing devices, data centers require cooling. HVAC systems are commonly used along with dehumidifiers to ensure that cool air is provided, hot air is extracted, and the air doesn’t get too humid.

With so much electricity and heat, there’s always a chance of fire. Fire suppression systems are universal, but they can’t rely on sprinkler systems as this would cause as much damage to the sensitive computer hardware as a fire would.

While fire suppression systems are universal in data centers, they can’t be water-based as this would damage sensitive electronics. Instead, inert gasses are generally used. The primary choice used to be Halon until that was found to be bad for the ozone layer. Modern systems typically use nitrogen. The concept is simply to flood the entire data center with nitrogen, pushing the oxygen needed for the fire to burn out through overpressure vents.

While this is highly effective at putting out fires, it’s also deadly. In a nitrogen-rich-oxygen-poor atmosphere, you can pass out from asphyxiation in seconds. Nitrogen is colorless, odorless, and tasteless, so there is no warning of danger. As such, fire suppression systems sound a pre-alarm that alerts anyone inside to leave immediately or get to a safe area outfitted with oxygen tanks and breather masks. After a short period for people to get to safety, the gas is rapidly dumped into the data center, extinguishing the fire.

Data centers often have raised floors. This provides many advantages. The core advantage is that in the case of a flood, there’s more room for rising water before any actual water damage occurs. Raised floors also allow cables to be run under the floor. However, many choose to run overhead cabling to make access easier. This also provides a convenient method for providing cool air when combined with porous floor tiles.

By positioning aisles of server racks in alternating directions, it’s possible to create cold and hot aisles. Cool air can be drawn from the cold aisles, and hot air can be exhausted and then removed from the hot aisles. This layout helps to optimize the provision of HVAC resources.

Implementing all the infrastructure of a data center is expensive. This can be especially difficult for companies with extensive data and processing requirements but currently limited funds. It can also be an issue for companies that don’t need enough area to let economies of scale kick in. To fill this gap in the market, many companies set up data centers with overly large capacities and then rent out portions of that capacity to companies. Data centers with multiple tenants like this are referred to as colocation.

Especially in colocation environments, security is essential. With lots of potentially sensitive data from multiple parties, network and physical security are important. Data centers are very careful about both, providing carefully segregated networks to individual clients so no data can be leaked over the network. Physical access is often complex to arrange, often requiring authorization in advance.

Access to interior locations is generally limited with separate locked rooms and even locked cages containing smaller banks of server racks. “Man-traps” are a helpful feature that essentially acts like an airlock, allowing access to be quickly denied at the point of entry with minimal risk to personnel. Access logs are also helpful for safety purposes so safety personnel can be sure that the building has been fully evacuated in the case of a fire, for example.

Many of the biggest data centers are owned by hyperscalers. These are huge tech companies like Google, Amazon, and Microsoft. They buy massive amounts of hardware and, in some cases, lease access to it. In their cases, access is typically virtualized rather than physical. Virtualization can offer improved efficiency in the use of system resources and can enable easy scaling when needed.

Location and Other Factors

The location of a data center is essential. It’s critical to be near a large power source, high-speed networking infrastructure hub, and physical transport infrastructure. Other considerations include environmental hazards, such as earthquakes, volcanos, floods, and hurricanes. The climate is also a big factor. Cooler locations have lower ambient air temperatures, requiring less cooling before being supplied into the data center. This helps to reduce operating costs. In some tests, small data centers have even been placed underwater. They have used the cool flowing water currents to provide even more effective and cheaper cooling.

This increases space and often power costs and requires additional cooling etc. This economy of scale is why many huge storage drives that are super expensive are available. They’re not meant for the average consumer. They’re meant for hyperscalers that will pay almost anything for improved space efficiency.

Data centers are the larger cousin of the server room. They combine core computing hardware such as networking equipment, storage capacity, processing power, and server functionality all in one place. This allows for economies of scale to kick in and simplifies connectivity. There are many design factors in data center design. However, data centers have to be huge to take true advantage of the economies of scale.

At this scale, they’re generally far larger than most companies need, so space can be rented out to smaller companies, providing economic advantages for both parties. Data centers are often located in custom-built facilities. However, some reuse unused office space, and some are even situated in old new nuclear bunkers.