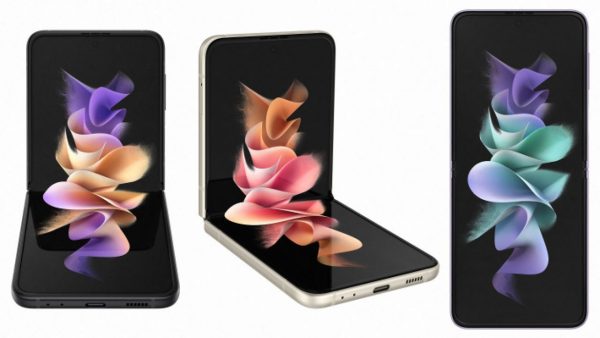 The Samsung Galaxy Z Flip3 5G is the latest iteration of one of the two types of foldable smartphones the company offers. It’s available worldwide for less than it was at release.

The Samsung Galaxy Z Flip3 5G has a small 3300mAh battery. It can fast-charge at 15W, enough to fill the battery in 90 minutes. It can also wirelessly charge at up to 10W. Reverse charging is available at 4.5W. However, you may want to avoid using it with the low battery capacity unless it’s indispensable.

Realistically, the battery capacity is small, with most high-end phones now having around 5000mAh. The power-hungry Snapdragon 888 CPU will just about manage a day’s battery life with standard usage. Still, it will likely struggle more under heavy use. The charging speeds are pretty low, though just bout acceptable given the small size of the battery.

The Samsung Galaxy Z Flip3 5G has a 6.7-inch main screen with a resolution of 1080 x 2640. It has a 120Hz refresh rate, supports HDR10+, and has a peak brightness of 1200 nits. There is also a secondary screen on the outside of the phone when folded by the cameras. You can use it as a viewfinder and view notifications or several widgets. It is 1.9-inches across and has a resolution of 260 x 512.

The main screen has a plastic film over it. As with the first generation of foldable phones, it can be easy to assume that this is a long or short-term screen protector. Therefore, it is ok to remove it. This is not the case, however. The film is an integral part of the display, and attempting to remove it will damage the screen. Like the rest of the back, the rear screen is protected by Gorilla Glass Victus.

One of the potential use cases of the second, smaller screen is that it can be used as a viewfinder for the main cameras, allowing you to use them for selfies. While this can result in better pictures thanks to the larger sensor and resolution, the screen’s aspect ratio actually presents an issue. When using the secondary screen as a viewfinder, it displays the image in what would be landscape orientation if the phone was unfolded. This provides a reasonable amount of screen to show a single person.

However, the camera’s photos are significantly more expansive than the screen. This means you have to guess if something you don’t want in the photo is actually in the frame or not, as it simply isn’t shown on the screen. Conversely, if you’re going to take a group selfie, you may have to explain that it’s ok that someone is half off the screen because the actual photo is broader. Oddly, the camera takes perfectly square photos when the phone is folded shut. You can revert to the standard aspect ratio but leave the phone open to do so.

There is no telephoto camera, so your zoom options are limited. You can use digital zoom up to 10x. However, you’ll see a noticeable decrease in quality even at just 2x zoom. Video-wise, the rear camera can reach 4K60. While the front camera can go up to 4K, it can only do 30FPS. Slow-motion can be recorded at 1080p240 or at 720p960 on the main camera.

The Samsung Galaxy Z Flip3 5G was released with Android 11 and One UI 3.1.1. However, at the time of writing, an update to Android 12 with One UI 4.1 is available. The One UI Samsung skin is generally well regarded, with some but not massive changes from stock Android.

The single most prominent feature of the Samsung Galaxy Z Flip3 5G is the ability to flip the phone open and closed. A lot of research and development budget has made the hinge and screen sturdier. The screen has been rated for up to 200000 folds, that’s enough for more than 130 folds a day for four years, more than 270 folds a day for two years, or almost 550 folds a day for a year. This means, more than ever, that the lifespan of the phone depends on your usage patterns. Heavy usage in one long stint every day will not affect the screen life as much as opening the phone regularly to check your messages.

Unlike flip phones of old, the joint of the phone is actually designed to be pretty stiff. This does make it a little awkward to open with one hand. However, it also means that you can open the phone to 90° or another angle and leave it there. For example, this could be useful if you’re in a video call and want to set the phone down but don’t have anything to lean it against. Some apps even allow you to treat the top and bottom half of the phone as separate areas when the phone is opened between 75 and 155 degrees, allowing consumption content such as a video to be placed at the top, with a chat window on the bottom half.

There is a fingerprint reader. However, unlike most modern high-end phones, it isn’t embedded under the screen. Instead, it’s a classic side power button/fingerprint reader combo. Unfortunately, it’s placed relatively high on the top half, making it a bit awkward to use for right-handed people and really uncomfortable to use for left-handed people. Facial recognition is available, as are PINs and patterns you’d expect.

Dual SIM cards are supported, with one nano-SIM and one eSIM. The phone has an IPX8 ingress protection rating. The “X” means it has no protection rating against dust. The “8”, however, means you can submerge it to a depth of 1.5m of water for up to 30 minutes. This is the first joint foldable phone with an IP waterproofing rating, with the Galaxy Z Fold3 being the other. Wi-Fi 6 is supported for high-speed home networking, and 5G is supported for the fastest mobile data speeds.

Since the previous generation, the CPU has obviously been upgraded. The screens have also seen significant upgrades. The main screen has had the refresh rate doubled. However, the exterior screen has been almost doubled in size and resolution. The speakers are now stereo rather than mono. Waterproofing is new, and the entire phone has been reduced in size by a millimeter or two.

The Samsung Galaxy Z Flip3 5G is undoubtedly a high-end phone with plenty of style. It’s got a lot of processing power and a great display. However, the cameras are pretty weak and will likely be an issue for someone who likes to take many pictures with their phone. A number of the kinks have been worked out of the earliest iterations of foldable phones, with waterproofing and increased longevity being standout improvements over previous entries in the market.

The battery size is likely to be a killer for many. However, concerns about the fold’s lifespan in the screen are likely to be difficult to assuage. The Samsung Galaxy Z Flip3 5G is a decent phone, but there are empirically better options for less money. The real question is, do you really want, or need, a phone that folds? If that’s the case, you’ll have to accept some compromises, at least for now. What are your thoughts on the phone? Share your thoughts in the comments below.