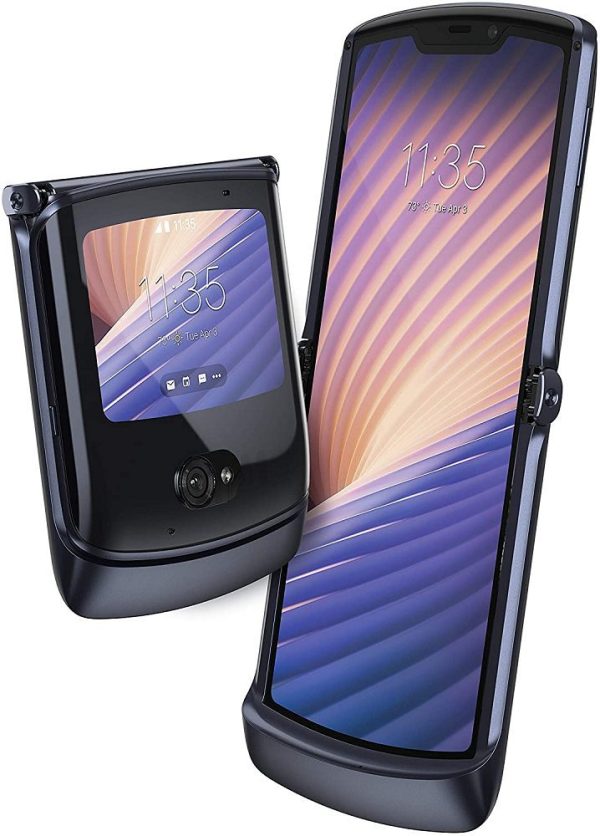 The Motorola Razr 5G is Motorola’s second entry into the foldable phone market. It was released in September 2020 and is still available worldwide, though only second-hand in some markets.

Motorola currently runs a single line of foldable phones, in which the Razr 5G is the second entry. It takes a similar form factor to the classic Motorola Razr v3 clamshell phone before smartphones were a thing.

The Motorola Razr 5G is available in a single capacity, with 256GB of storage and 8GB of RAM. There is no support for storage expansion. It is available in three colors: Polished Graphite, Blush Gold, and Liquid Mercury.

The Motorola Razr 5G features a tiny 2800mAh battery. It can also fast charge at 15W. There is no support for wireless or reverse charging.

Many foldable phones have high-end hardware but only average battery capacities due to weight savings and reduced space due to the hinge. This results in lower battery life that you might see in flagship phones which already struggle to survive a full day of reasonably heavy use. The Motorola Razr 5G manages to take the worst of both worlds with a small battery and weak hardware.

The 2800mAh battery in the Motorola Razr 5G is the smallest in any foldable device on the market. It is smaller than most modern mid-range phones too. Even with the mid-range hardware and the relatively low-resolution screen, the battery life is tricky to manage to attain a full day’s usage.

The 15W fast charging also seems weak, but it’s a good balancing act. As much as we want our phones to charge as quickly as possible, this does come at the cost of the lifespan of the battery capacity. Given the measly starting capacity, the Motorola Razr 5G can’t really afford to lose any capacity. Additionally, the 15W fills up the phone quickly with a small capacity. However, that’s a comment on the battery size rather than the charging speed.

The Motorola Razr 5G features a single rear camera. It’s a wide-angle camera with a 48MP pixel-binned, 1/2.0-inch sensor and an f/1.7 aperture. The main screen also features a notch with a hole punch selfie camera, a 20MP pixel binned sensor, and an f/2.2 aperture.

The camera setup on the Motorola Razr 5G is fragile. While the camera modules used are pretty decent and produce good photos and video, the lack of secondary or tertiary cameras is difficult to stomach on a device that costs flagship money when released. Even budget smartphones generally have an option for ultrawide or zoom photography now.

The Motorola Razr 5G was released with Android 10 but has since received an upgrade to Android 11. It runs pretty stock Android, though it has some customizations, primarily to use its small cover screen.

The single most prominent feature of the Motorola Razr 5G is the ability to flip the phone open and closed. The hinge design is reasonable, allowing the screens to be flush against each other. The crease is present but not particularly noticeable, but significantly less so than it is on Samsung’s foldable devices. The joint of the phone, like most foldable phones, is relatively stiff to move. However, it can’t hold a position reliably beyond the fully open or fully closed positions.

A fingerprint reader is located on the back of the phone, just underneath the hinge. While this may have been a popular location for fingerprint readers in the past, it’s not particularly convenient to use when unfolding the phone.

Wi-Fi ac is supported for high-speed home networking, while mobile data support 5G for the best data speeds on the go. Additionally, while it doesn’t have an official IP rating, some efforts at waterproofing have been made. So it may be ok in some rain but won’t survive being submerged.

From the previous generation Motorola Razr 2019, the cameras have significantly improved quality, though not in number. The layout has been redesigned to move the fingerprint reader to the back, and the overall design has been refined. The hinge mechanism and folding screen also appear to be significantly more sturdy.

The Motorola Razr 5G is, realistically, a nostalgia piece, playing for the interest of those that loved the trendy original Razr clamshell feature phone. Its performance is decidedly mid-range, especially now, two years after release.

The Motorola Razr 5G will still generate interest despite the notable downsides. Its distinctive styling and the actual usable secondary screen on a clamshell foldable smartphone are undoubtedly positive points. The upcoming release of the Motorola Razr 2022 may also drive the price down while offering an updated alternative with what is rumored to be flagship-level hardware.

The real question is, do you really want, or need, a phone that folds? If that’s the case, you’ll have to accept some compromises. In this case, there are quite a few to accept. Whether that’s too much to ask in this case is down to the individual. What are your thoughts on the phone? Share your thoughts in the comments below.