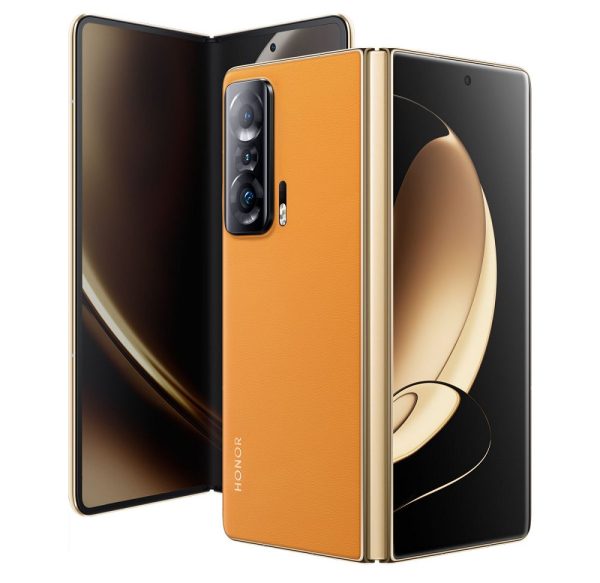 The Magic V is Honor’s first entry into the foldable phone market and was released in January 2022. It is exclusive to China, with no rumors about any possible international release.

Like the Oppo Find N released late last year, the Magic V has a hinge design that allows the two halves of the main inner screen to fold flush against each other. Obviously, this looks better than the gap left in Samsung models. It also has a functional advantage in that dust can’t get in the gap when the phone is closed and in your pocket because there is no gap for it to get into. The Magic V is also the first foldable phone to get the Snapdragon 8 Gen 1 CPU.

The Honor Magic V has a good-sized 4750mAh battery. It can fast-charge at up to 66W, with the included SuperCharge charger allowing 50% charge in 15 minutes. It does not support wireless charging.

Many foldable phones have high-end hardware but only average battery capacities. This results in lower battery lives than you might see in flagship phones which already struggle to survive a full day of reasonably heavy use. Of the foldable phones on the market, the Magic V has one of the largest batteries, which will be suitable for overall battery life. However, it’s still not quite flagship phone-level territory.

The primary display has a fingerprint-resistant top layer thanks to anti-dust, anti-oil, and hydrophobic properties. The exterior cover screen is glass-covered like the rest of the back, except for the models with an eco-leather back.

The rear cameras are a strong point, at least for what’s there. Both the primary wide-angle camera and the ultrawide camera have excellent resolution. They will be capable of taking quality pictures. The support for autofocus on the ultrawide is especially welcome as it allows it to double as a macro camera. The spectrally enhanced camera is an exciting inclusion, though.

They’re not commonly seen and can be used to create fantastic false-color photos, so their inclusion is a positive. The lack of a telephoto camera is a bit of a disappointment, though. Even a 2x lens would have offered more flexibility in the photos taken at high quality. The 10x digital zoom will offer some results but not at a true optical zoom quality level.

Video-wise, the rear cameras can record video at 4K or 1080p at 30 or 60fps and have digital stabilization. The selfie cameras can also record at either 4K or 1080p but only 30 frames per second.

The Honor Magic V runs on Android 12 with the Magic UI 6 skin. Honor also releases tablets, so the software should be reasonable in handling the extra-large screen. This is Honor’s first foldable phone. However, it’s unlikely to see quite the polish as Samsung has regarding foldable specific functionality. Being a China regional exclusive, the Magic V also doesn’t support Google Play services which may be a big issue for potential western buyers.

The single most prominent feature of the Honor Magic V is the ability to flip the phone open and closed. The hinge design is excellent; following in the design footsteps of Oppo’s Find N. It closes so the internal screens are flush against each other. However, when opened, the crease that still plagues foldable phones is more noticeable than on the Find N. Happily; it is still less noticeable than the crease on Samsung’s foldable phones.

Unlike the first generation of foldable smartphones from other manufacturers, the joint of the phone is actually designed to the joint of the phone pretty stiff. This does make it a little awkward to open with one hand. However, it also means that you can open the phone to 90° or another angle and leave it there. For example, this could be useful if you’re in a video call and want to set the phone down but don’t have anything to lean it against.

There is a fingerprint reader. However, unlike most modern high-end phones, it isn’t embedded under the screen. Instead, it’s a classic side power button/fingerprint reader combo. This makes some sense as the single sensor can be used to unlock the phone when it’s closed, open, or somewhere in between. The phone can also be unlocked with facial recognition.

This is the first generation of foldable smartphones from Honor, so there is no previous model to improve from. Nevertheless, it has been enhanced on several things from its rivals. The hinge has been designed so that the screens can sit flush together, though it’s not the first company to manage that trick. The crease is less noticeable than it is on Samsung’s foldable. The screen size is also a solid point. The exterior screen is the same size and aspect ratio as you’d expect to find on a modern flagship, which makes using it when folded easier.

The Honor Magic V is a solid foldable phone. Its recent release date means it has the best CPU on the market for a foldable phone giving it a raw performance advantage. It does have some issues, however. The lack of any waterproofing rating, the lack of a telephoto camera, and the limit of just 90Hz on the main display are the main ones.

Concerns about the lifespan of the fold in the screen are likely to be difficult to assuage, even with the excellent hinge mechanism. The Honor Magic V is a strong phone. However, suppose you’re willing to sacrifice the ability to fold. You can get standard flagship phones for a significantly lower price and a better screen and camera. The real question is, do you really want, or need, a phone that folds? If that’s the case, you’ll have to accept some compromises.