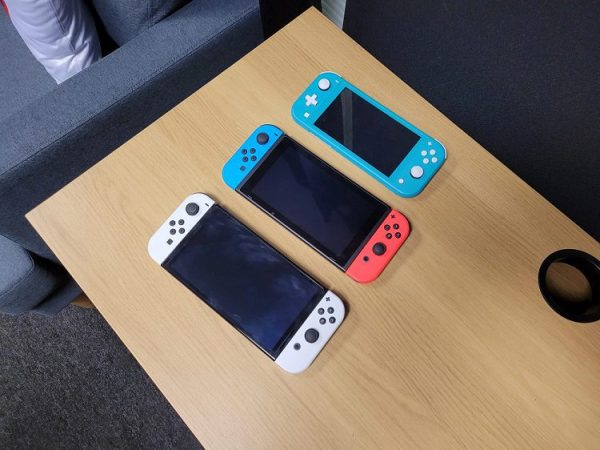 After the initial Switch release in 2017, Nintendo came out with a Lite version in 2019 – and more recently, they released a revamped version of the original in the form of their OLED model. While it’s quite easy to tell apart the original Switch and the Lite, it’s a little more complex for the OLED, as it is very similar to the original model, with just a few important differences.

If you’re wondering which one to buy, we’ve created a handy little comparison for you here to make things easier. Here are all the differences you need to know about these two Switch models!

The newest member of the Switch family, the OLED model, was released in late 2021, a full 4 years after the original model. Unlike the Switch Lite, which offered a considerably different experience from the original device, the OLED is fairly similar. A rather noticeable difference, though, is the price – while the first model was originally priced at $299.99, the OLED model costs $349.99.

The price is mostly justified by the improved screen and a few other touch-ups – the two devices are very similar. If you are interested in the Switch Lite instead, you can check out our comparison.

The new OLED model and the original Switch are fairly similar. when it comes to what’s under the screen. Both are based on the same custom Nvidia Tegra X1 processor and have 4GB of RAM. They also offer the same resolution – 720p at 60fps in handheld mode and 1080p at 60fps in docked mode. Remarkably, the OLED version offers the same battery life as the standard model does, despite the improved display.

That said, the two aren’t identical – there are some noticeable differences between the two.

Compared to the original model which measures 23.8cm x 10.2cm x 1.4cm, the OLED is the tiniest bit thicker – it measures 24.2cm x 10.2cm x 1.4cm. Not too surprisingly, the OLED model is also a little bit heavier, weighing 420g compared to the 398g of the original model. A noticeable difference is the larger screen that the OLED has – however, instead of making the console bigger, Nintendo shrunk the bezels around the screen, giving a larger OLED screen on a console of the same size.

Naturally, given the OLED name, the Switch OLED boasts a much better display than the original model. In addition to being larger, it offers better color accuracy, higher contrast, and better viewing angles. The original Switch featured an LCD panel.

Another element that the OLED improved over the original is the flimsy and breakable kickstand that many users disliked. The OLED has a full-width kickstand that can easily adjust to different angles and isn’t quite so breakable.

Both Switch models are available in the typical black/red/blue color scheme. Still, the OLED is also available as a white version. For that one, even the otherwise always black dock is snow-white, along with white JoyCons. The difference is purely cosmetic, and the JoyCons and dock can be freely swapped between versions.

While both the original Switch and the Lite had 32GB built-in storage, the OLED expanded and offered 64GB by default. All types can be expanded via a microSD card on top of that. Both devices have the same capacities and sizes for the MicroSD you can put in also.

Which One Should I Buy?

If you are first buying a Switch and plan to use it in handheld mode, the OLED is a good investment. While it is a little pricier, the improved display really is noticeably nicer to look at – however, for those who already have the original Switch, an upgrade is probably not necessary. The Switch Lite offers a different game experience. The OLED is essentially the same as the original Switch as far as the gaming experience goes. So we would recommend you stick with the one you have! Give us your opinion in the comments below.