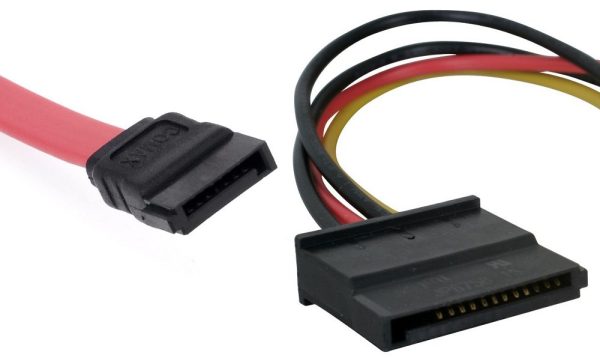 SATA is two different things: a physical connector standard and a logical communication bus. When SATA was first designed, the two were linked. In fact, the physical SATA connector can only use the logical SATA bus. However, the SATA bus can be accessed over newer physical connectors. In this article, we’ll cover both.

In computing, a logical bus is a communication protocol to transfer data. SATA stands for Serial AT Attachment. The AT isn’t technically an acronym to avoid patent infringements. It is based on IBM’s predecessing Advanced Technology Attachment (ATA) standard, which was later renamed PATA. The P standing for Parallel to differentiate it from the Serial bus. The SATA protocol was first standardized in 2003.

The first generation of the SATA protocol supported 1.5Gbs of bandwidth. This allowed for up to 150MBs of usable bandwidth with overheads considered. High-speed HDDs can actually exceed these transfer speeds. SATA II doubled the supported bandwidth, then SATA III doubled the bandwidth to 6Gbs. This exceeds the capabilities of any HDD but can be a limiting factor for SSDs connected via SATA.

The SATA protocol came with a new connector, a pair of connectors: one for data and one for power. Both connectors are long and thin with a small L shape at the end to ensure they’re connected the right way up. The power connector is wider than the data connector, making it easy to distinguish. The power cable plugs into the drive directly from the PSU. In contrast, the data cable will connect the drive to the motherboard.

There are a small variety of secondary connectors included in the SATA standard. However, most were short-lived and can’t be found in modern devices. Outside of the SATA standard, the physical M.2 connector supports transferring data over the SATA bus. When purchasing M.2 SSDs, it’s important to double-check if the SSD is a SATA or NVMe drive.

Any M.2 SSD should actively advertise if it connects via NVMe or SATA. If it doesn’t, there’s a fall-back method. The M.2 connector standard defines different cut-outs for other use cases, referred to as keys. NVMe M.2 drives will only have an M key.

When looking over an M.2 connector, the key is a visual indicator of what bus the slot is connected to. Typically, it is connected to the NVMe bus for high-speed connectivity. But with the B key, data instead runs over the SATA bus. This has the same limitations as the standard SATA connectivity and does not support any extra bandwidth.

Any M.2 slot will only have a single key cut-out, depending on which bus it connects. This makes it impossible to accidentally connect an NVMe M.2 SSD to a SATA M.2 port. While a dual-keyed SATA SSD can physically plug into an NVMe M.2 slot, it is still limited to the SATA transfer speeds. Additionally, this would be non-standard and may not be supported by the BIOS.

What is SATA Good for in a Modern Computer?

SATA is primarily useful for storing data where the writing and reading of said data are not time-sensitive. This can work well for images, relatively low-resolution video, or standard documents where the read/write time is in a relatively short burst. Or the required transmission speed for real-time use is below the bandwidth restrictions of the drive over the SATA connection.

For example, suppose you want to save a word document. In that case, the amount of data to be read or written is so tiny that the relatively slow speed of SATA isn’t an issue. Similarly, the bitrate needed to watch or save 720p 30fps video is lower than the maximum data rate of the SATA connection.

SATA isn’t ideal when speed is an essential factor, or substantial transfers are likely to happen. For example, suppose you want to edit 4K 60fps video footage. In that case, the bandwidth SATA offers simply isn’t enough to do this in real-time. Loading times in video games are also slower on SATA drives as the data simply can’t get loaded into the RAM and VRAM fast enough. Similarly, these will take longer over a slow SATA connection if you want to perform large system backups. Critically it will also take longer to restore from a backup over SATA.

Due to speed limitations, SATA is a legacy connector and logical standard primarily useful for HDDs. Early SSDs used the connector because it was already standard, making market adoption easier. Additionally, early SSDs were much slower than modern drives due to low levels of technological maturity.

Later the M.2 connector offered the ability to connect to the SATA bus for entry-level SSDs. A different physical cut-out, referred to as a key, is used in SATA and the faster NVMe M.2 connectors to minimize consumer confusion. This makes them visually distinct and, to some degree, physically incompatible. What do you think? Don’t forget to leave your comments below.