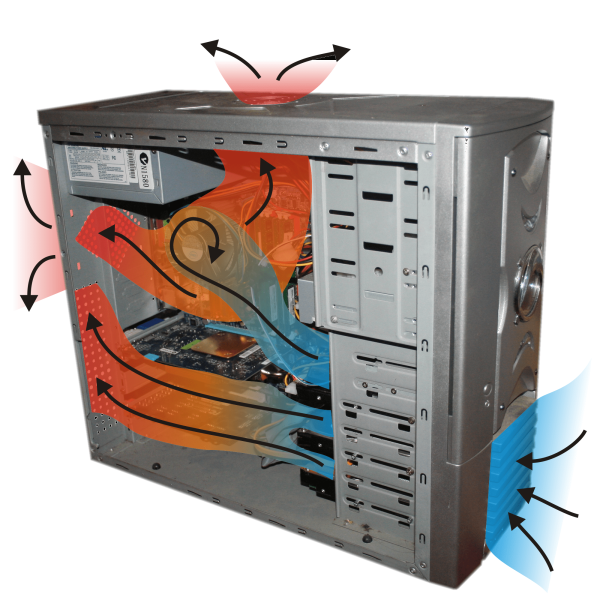 When configuring a PC, one of the more important things you need to be aware of is thermals. Having your fancy new computer fail to reach its full potential because it’s overheating isn’t great. The main part of heat management is cooling, with most of that being down to airflow.

You need to make sure your case has enough cool air coming in to cool down your devices. One topic on this subject you may have come across is positive vs negative pressure, and which is preferable.

What is negative air pressure?

Each fan in your computer can move a certain amount of air each minute. Negative air pressure is where you have more air being pushed out of your case than sucking it in.

By configuring your fans in this manner, you end up with lower air pressure inside your case than outside of it. This causes air to be sucked in through gaps in your computer case, which can pull in dust, dirt, and hair. All of which are bad for your cooling situation.

What is positive air pressure?

Positive air pressure is the opposite. It’s where you have more air being sucked into the case than is being pushed out by the fans. This leaves you with higher air pressure inside the case, the difference won’t be much, as the case won’t be airtight, but it can be enough to have an interesting effect.

If you’ve got more pressure on the inside than the outside, the air will try to escape to equalise the pressure. Most of this will be through the fans already blowing air out of the case, but some air will squeeze out through other gaps in your case where there are no fans. This extra airflow can be just enough to prevent, or at least reduce the amount of dust getting into your computer.

By having more pressure in your case, you can ensure that air only enters where specific fans are sucking air in. Ideally, you’ll have dust filters in the location of the intake fans to further reduce the amount of dust that can enter your pc.

For the best airflow, you don’t want your fans fighting a losing battle against air pressure. A balanced configuration is the most efficient way to cool your pc although it should tend towards a slight positive pressure if you can help it.

Tip: As much as it might seem important, the concept of heat rising doesn’t have too much of an effect. Sucking cool air in the top and exhausting hot air from the bottom of your case is a perfectly fine configuration, it will even help prevent dust from accumulating at the bottom of your computer.