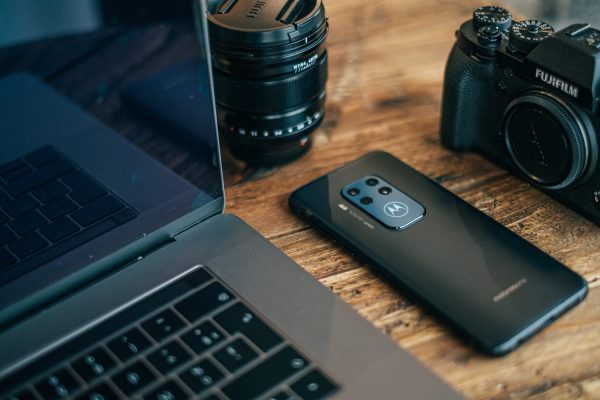 Motorola has not been in the limelight for quite a while. It did offer phones in the mid-range, but could not compete with Samsung or Xiaomi. Then Motorola finally came in front and center with their remodeled Razor phone, but given its price and durability, it left a lot to be desired. Now, Motorola finally wants to compete in the premium smartphone market with the Edge+ phone. Priced at $1000, this is priced in line with the other flagship phones. So, let’s take a look at the features of the Motorola Edge+ and see if it holds up.

The Motorola Edge+ follows the current smartphone trend of having glass wrapped around a 6000 series aluminum frame, with the front glass being the latest Gorilla Glass 5 for durability. This phone offers two distinct colors to choose from Smokey Sangria and Thunder Grey. The phone’s dimensions are as follows: 6.34 x 2.81 x 0.38 inches and weighs around 203g, reasonable weight for the phone this size. This phone comes with a headphone jack, a feature that has all but disappeared from every phone since 2019. It packs dual speakers that deliver a loud and crisp audio quality. It possesses three microphones that provide excellent call quality and voice recording.

One of the main features of this phone is the display since the name of the device is named based on it. The display is a sizeable 6.7-inch FullHD+ screen with an aspect ratio of 19.5:9 that flows over the edge. It also supports a 90Hz refresh rate, but it is underwhelming, given that the Samsung S20 provides a 120Hz refresh rate for the same price. The phone uses an OLED panel that has support for DCI-P3 color gamut, which can produce up to 1 billion colors. The phone does have the HDR 10+ feature that aids video and movie consumption, but it only offers 1080p resolution as opposed to 1440p given its premium price.

Motorola has brought a rear triple camera setup to its latest smartphone. The first one is the main 108MP with an f/1.8 aperture that uses pixel binning by combining 4 pixels into 1, taking the quality of the photos to another level. The main camera also has features like Macro vision that lets it take detailed photos up close, 10x optical zoom for crisp pictures of objects that are far away, HDR, and video capture resolution that goes up to 6K at 30fps and slow-motion at 1080p 120fps.

The second camera is an 8MP telephoto lens with an f/2.4 aperture, which can punch in to take eloquent portrait shots with its 3x optical zoom and optical image stabilization. The portrait mode feature focuses on the subject and implements a bokeh effect for that blurred background.

The third camera is a 16MP wide-angle lens with an f/2.2 aperture, capable of taking breathtaking wide shots that can include multiple subjects. There is also a separate sensor called the time of flight that helps in detecting depth in videos and pictures.

The phone also has a 25MP selfie camera with an f/2.0 aperture, which can wide-angle pictures and videos. It includes features like HDR support, Gesture selfie for taking pictures using gestures, Portrait mode for taking images with bokeh effect, screen flash, and can shoot slow-motion videos up to 1080p at 120fps.

This phone possesses the brand new Qualcomm Snapdragon 865 octa-core 7nm processor that is capable of reaching a frequency of 2.84 GHz and has the new Kryo 285 architecture. It can natively connect to 5G in supported cities, has the power to support the new LPDDR 5 RAM, and the performance is improved by 25% over the previous generation. The chipset also integrates the new Adreno 650 GPU, which can support any modern graphically intensive mobile games and smooth video playback.

The Edge+ is offered in only one configuration of 12GB RAM and 256GB of onboard storage. The RAM is a brand new LPDDR5 memory, which is extremely efficient at keeping application open and also gives the option to keep up to 3 apps open without refreshing. The storage is the latest UFS 3.0, which has a faster transfer rate and has better power management. Motorola should have at least offered a second lower tier configuration option for better appeal and price.

This phone operates on the latest version of Android 10. Moto Actions is a feature that integrates with the software and performs tasks by using gestures like the double twist to open the camera app, the chopping gesture to turn the flashlight on and off, etc. Motorola is known to provide a clean and smooth software experience by not adding an extra skin to their phones, and this phone makes no exception.

This phone is powered by a respectable 5000mAh battery, due to the large camera sensor and 5G support. The battery comfortably lasts a day, and it supports fast wired charging up to 18W and wireless up to 15W. This phone also has reverse power-sharing, which can deliver a charge of 5W, useful for charging small devices like smartwatches or wireless earbuds.

Since this is a flagship smartphone, it is embedded with the latest Wi-Fi 6 along with other Wi-Fi bands. It has a nano sim slot, and it can utilize both millimeter-wave and sub 6 5G, thus future-proofing the phone.