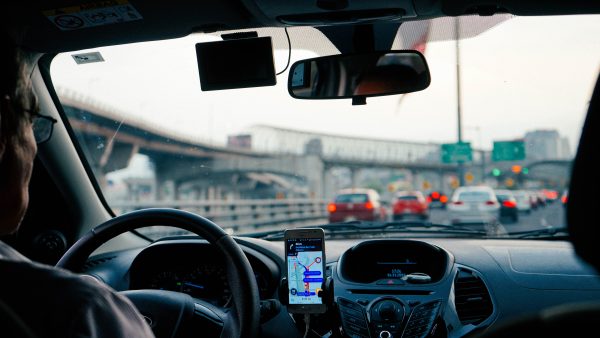 Uber is one of the greatest innovations in carpooling in the 21st century. With the simple click of a button on your phone, you can have someone give you a ride to virtually anywhere they are willing to take you (for a small price, of course). However, if you want to catch a ride to wherever you want to go, you first have to download the Uber app on your phone. Here’s how to download the Uber Quick App on both Apple and Android phones.

On IPhones, the distribution platform for buying apps is called the app store. The app store is on all apple devices, and should be on the first page of applications. The icon for the app store looks like three sticks over top of each other on newer phones, or a paintbrush and a pencil over a stick on older models. Once you are in the app store, go to the search bar and type in ‘uber’. The app is a black square with a white circle and a smaller black square inside, with a line on the left leaving the small black square.

The app may also appear as a black square with ‘Uber’ written in white on it. Select this app to download it; The app takes up about 300 MB of data space to install. Uber is also able to access information about your current location, and is available in 37 different languages.

Android is the name for all phones that aren’t Apple phones, due to Apple using a completely different operating system (iOS). The distribution platform for android devices is called Google Play, and is available on the first page of apps of all phones. The Google Play icon looks like a triangle shaped play button with orange on the right tip, green and red next to it, and blue on the left side. Once inside, go to the search bar and search ‘uber.’

The app is a black square with a white circle and a smaller black square inside, with a line on the left leaving the small black square (a brilliant design, I might add). The app may also appear as a black square with ‘Uber’ written in white on it. Select this app to download it. The size of this app, unlike on IPhones, varies based on the phone you have. Once installed, Uber is able to access information about your location.

To use the Uber app in any way, you first need to do two things:

Once you do these two things, you can now use the Uber app. Here are a few of the things that you can do with the app:

Select a Location to Travel

If you select your current location and the place you want to travel to, chances are there’s an Uber driver in the area willing to take you there!

Set Your Friend as a Destination

You can set a friend’s current location to either your destination or a stop along the way. Uber drivers are usually willing to take extra stops for customers if that’s what they want to do.

This allows you to meet up with other people for carpooling, which could help you save money on a trip.

This allows you to make a request for a ride verbally instead of through placing an order through selecting an option on your phone’s screen.

This section allows you to receive feedback on a variety of potential problems with the Uber system, including the VoiceOver, service animal issues and driver issues. Particular driver issues that can be readily addressed include payment difficulties, lost items and bad service (hopefully not this last one)