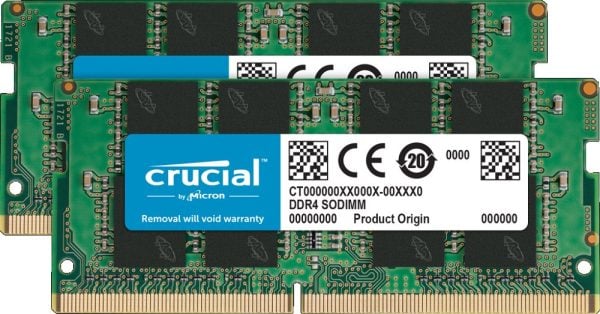 If you like tech, there’s a decent chance that you’ve seen inside a computer at some point. You may identify some or all of the parts by sight. The inside of a laptop may well be another thing entirely. Unlike desktop computers, you don’t really get laptops with sizeable tempered glass or polycarbonate panels to let you see inside.

Most people don’t open up their laptops, though you should probably clean the fans occasionally. With how thin RAM is, you’d be forgiven for thinking that you could just fit a standard RAM DIMM in a laptop without needing any changes. That’s not the case, though. Internal volume is at a high premium in laptops. So they use a smaller form factor, SODIMM.

SODIMM stands for Small Outline Dual In-line Memory Module. As you might expect from the name, SODIMMs are smaller than DIMMs. According to the JEDEC standards, SODIMMs must be 30mm high and 3.8mm thick. SDR, DDR, DDR2, and DDR3 SODIMMs were 67.6mm wide. While DDR4 and DDR5 SODIMMs were 2mm wider at 69.6mm. The other measurements are similar compared to PC DIMMS, which are almost twice as wide at 133mm.

Like the DIMM form factor, no generation of SODIMM form factored RAM is compatible. This is because the form factor is essentially the only difference between DIMM and SODIMM. There aren’t any performance impacts beyond increased thermal constraints and physical capacity limits inherent to the smaller form factor.

Like desktop DIMMs, SODIMMs have also increased the number of pins over time. SDR SODIMMs had 144 pins, while DDR and DDR2 used 200 pins. DDR3 upped the pin count to 204, while DDR4 increased that to 260 and DDR5 to 262. This further ensures electrical incompatibility between generations of SODIMM memory.

Where Are SODIMMs Used?

The small volume of the SODIMM form factor makes them ideal for use in computers with unusually constrained space. As you might have gathered from the intro, SODIMMs are primarily used in laptops. Not all laptops use SODIMM memory, though. As much as it is convenient for users that want the option to upgrade RAM in the future. It’s slightly more complex and expensive to implement than simply soldering the RAM chips directly onto the motherboard. Similar to what you would see on a mobile phone.

The main issue, at least historically, with SODIMM has been the reduction in the physical capacity compared to full-sized DIMMs. Single DIMM and SODIMM memory capacities have obviously increased over time as memory density has increased. The sheer lack of space has typically meant that available capacities in SODIMM form factors have been around half that of full-sized DIMMs.

This generally isn’t too much of an issue, as laptops aren’t typically used for hefty workloads that would require large amounts of RAM. Mobile workstations may be an exception to that. However, they can get around this by offering four rather than the standard two SODIMM slots.

Capacity shouldn’t be an issue with modern hardware. It’s possible to get 32GB SODIMMs with DDR4 or DDR5 memory, which are not even costly. That allows for up to 64GB of RAM in a laptop with the standard two SODIMM slots, which should be more than enough for almost any task.

One of the most significant issues with small form factor computers, especially laptops, is thermal constraints. It can be difficult to dissipate heat from such a small area, especially with the limited airflow. To make it even worse for SODIMM memory. Laptops typically only allocate the required space, meaning there’s no room for a large heat sink like you find on full-size DIMMs.

This all makes it harder to cool the RAM. This hasn’t been a massive issue in the p. Still, thermal management will get more complex as RAM speeds increase and the power management moves onto the SODIMM with DDR5. This will likely mean SODIMMs working on the lower end of the JEDEC standardized speeds. However, most use cases will see only a minimal difference with RAM speed changes.

The main tools to manage SODIMM thermals are airflow and surface area. Airflow is down to laptop designers, but the RAM manufacturers do their best by applying thermally conductive stickers. These provide as much surface area as possible without meaningfully impacting the size to provide the best conditions for cooling.

SODIMM is a miniature form factor version of DIMM, used for RAM in small form factor computing devices to offer RAM upgradability. SODIMMs and DIMMs of the same DDR generation are essentially directly comparable, with only minor performance differences. The reduced size does have some impacts, notably on cooling and capacity. SODIMMs are only compatible with the same generation of memory, i.e., a DDR3 SODIMM must go in a DDR3 SODIMM slot and can’t go in a DDR4 SODIMM slot. Don’t forget to share your thoughts in the comments below.