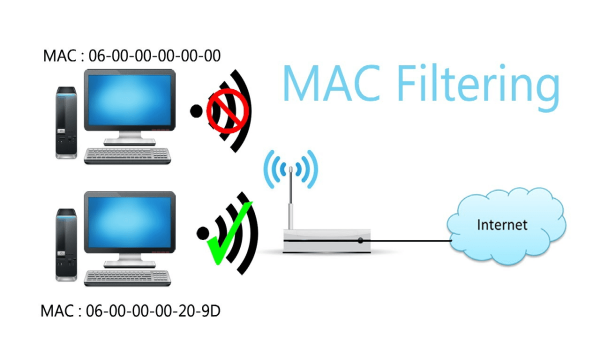 When configuring your home router, one of the common settings you may see is a “MAC address filter”. The MAC filter is an access control security tool that restricts which devices are allowed to connect to your network.

Tip: A MAC address has nothing to do with Apple or MacOS, all networked devices have and use MAC addresses.

What is a MAC address?

A MAC address is a 48-bit string of alphanumeric digits, that is 0-9, and a-f. Typically, MAC addresses are displayed with six pairs of digits separated by colons, such as 01:23:45:67:89:ab. Some devices display MAC addresses with hyphens instead of colons, but the structure otherwise remains the same, e.g. fe-dc-ba-98-76-54.

A MAC address is a pseudo-unique identifier used to distinguish devices within a single network. MAC addresses can only be used to communicate within the local network, it is impossible to use them to communicate outside of your own network. For network traffic intending to leave the network, a different address system must be used such as IP addresses.

Because MAC addresses are only used within a single network, there is no need for them to be globally unique. Therefore, it is possible that there can be two devices on our network that try to use the same MAC address, however, that is unlikely, given the number of devices on the average network. The first half of a MAC address is used to indicate the manufacturer of the networking module, while the second half is given a random value when the device is made.

What is a MAC address filter?

A MAC address filter is simply another way to limit which devices can connect to your network.