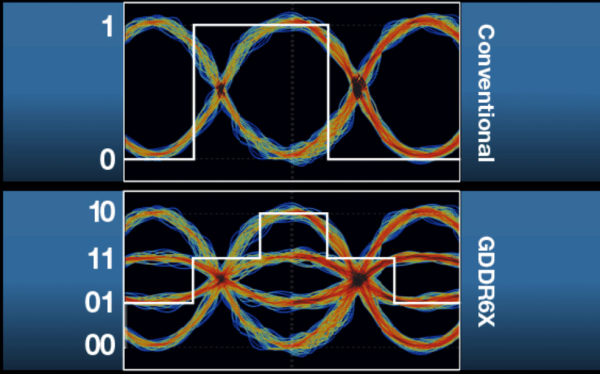 With Nvidia’s announcement of its 3000 series RTX graphics cards, gamers were introduced to a new type of graphics memory, GDDR6X. GDDR6X memory comes with a revolutionary design that significantly increases the data transfer speed. The new feature is called PAM4 or Pulse Amplitude Modulation 4.

Traditionally the transmissions to and from memory operate in a system with two power levels 1 and 0. PAM4 revolutionises memory communications by using four power levels allowing for double the amount of data to be sent with each cycle. Traditionally there are two power levels, with one transmitting a binary 0 and the other transmitting a binary 1. PAM4’s four levels allow it to transmit one of four signals, 00, 01, 10, and 11.

In terms of power efficiency, GDDR6X memory uses 15% less power per bit of data transferred than GDDR6 memory. This is despite GDDR6X having 50% extra bandwidth compared to GDDR6. The disparity between bandwidth increases and power efficiency improvements, however, means that overall power requirements have increased.

In order to keep power requirements reasonable and to simplify the complexities of the first generation of PAM4 memory controllers, GDDR6X memory operates at lower clock speeds than earlier GDDR6 memory. The reduced clock speed means that GDDR6X only sees a 50% increase in memory bandwidth rather than a 100% increase. This does help keep costs and thermals down though. Future generations of GDDR6X memory are likely to see further performance advances

Each 8Gb (1GB) chip of GDDR6X memory has the bandwidth to transfer 84GB/s. This means that Nvidia’s RTX 3080 graphics card, which has 10 GDDR6X chips, will have a total memory bandwidth on the order of 840GB/s

Micron, the developer and manufacturer of the GDDR6X memory has pushed the boundaries of what can be done with memory. As of September 2020, it’s not clear if Micron has developed this memory on its own or if JEDEC is in the process of creating a standard and Micron just jumped the gun.