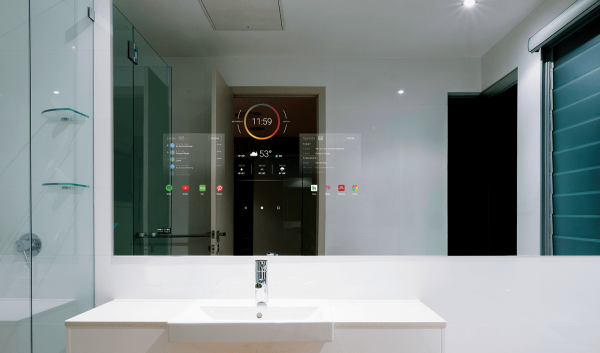 Everyone is familiar with mirrors, but smart mirrors are a bit different. Smart mirrors are becoming more and more popular, both in home and in retail environments, but most people still don’t really know what one is. A smart mirror is a device that functions as a mirror but adds something to the image through a form of virtual or augmented reality. It can take the form of a camera and screen to create a virtual avatar that mirrors you, a screen that overlays an image on you without creating an avatar, or a mirror which has a screen behind it that displays information.

Some shops are now offering smart mirrors that can be used as virtual changing rooms. By using a full-length screen and a video camera it’s possible to show an example of what an item of clothing will look like or with more advanced versions what different hairstyles and colours would look like.

Basic versions use a virtual avatar and match its movements to the users via the camera and image recognition algorithms. The avatar can then be equipped with the store’s range of clothing so you can see roughly how it would look. Models that use avatar representations aren’t really ideal as they don’t really give the user the feel of how something would look like on them, just on an avatar matching their movements.

Smart mirrors can be a form of augmented reality

More advanced versions use image recognition algorithms to place images of the product on the actual image of the user, some take still images while others can do so in real-time. This approach, while a lot more processor-intensive is a lot more effective and can actually give a user a much more realistic view of how a product would actually look on them. Modifying real images of the user means that smart mirrors can also be used to test new hairstyles or colours to see how they look on you. A similar feature is offered by some opticians which have the functionality to allow you to virtually try on the range of glasses.

Other types of smart mirrors don’t involve a camera at all but instead, have a screen placed behind a two-way mirror. With careful design, this allows the image from the screen to be visible through the mirror, while not interfering with the normal reflection. This design of smart mirrors is intended to offer enhanced functionality to normal home mirrors. Many smart mirrors of this type are homemade by enthusiasts, but pre-built options are available. The two main ways to do this are to use an Android tablet or smartphones running specific apps or use a Raspberry-Pi connected to a stripped-down computer monitor.

Raspberry-Pi-based smart mirrors typically use the open-source MagicMirror2 software which includes a broad range of optional modules that add functionality such as weather reports, news feeds, inspirational quotes, and more.