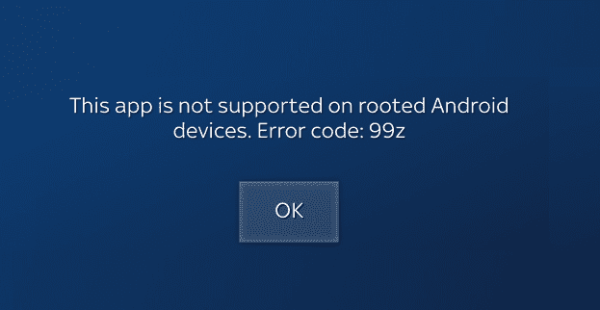 Why Am I Getting Error Code 99z on Android?

Are You Using a No-Name Device?

Cheap, no-name devices may come rooted from the factory. Additionally, many apps won’t run on no-name Android devices or rooted terminals. When you try to launch them, error code 99z will immediately pop up on the screen.

To check if your Android device is rooted, install a Root Checker app and scan the terminal. If it’s rooted, try to unroot it, restart it, and relaunch the problematic app.

Ensure you’re running the latest Android version on your device. Go to Settings, select System and Update and check for updates. Install the newest updates, restart your device and check if error 99Z persists.

Other users prefer to use Magisk to modify the OS without actually telling your device that the system has been changed. Magisk doesn’t modify the actual system files, and it works by storing the temporary modifications in the boot partition. That’s why your Android device doesn’t detect anything unusual. Use this tool only if you’re a power user.

However, certain apps can still detect Magisk even if you use it under a different name. Disable Magisk or other similar tools before launching your apps and check the results.

Error code 99Z pops on the screen when you try to launch an app on a rooted device. The same error may occur if the app doesn’t recognize the device manufacturer. Make sure your device is not rooted. If you’re using Magisk or other similar apps, disable them. Did you find other ways to bypass this error? Do let us know in the comments below.