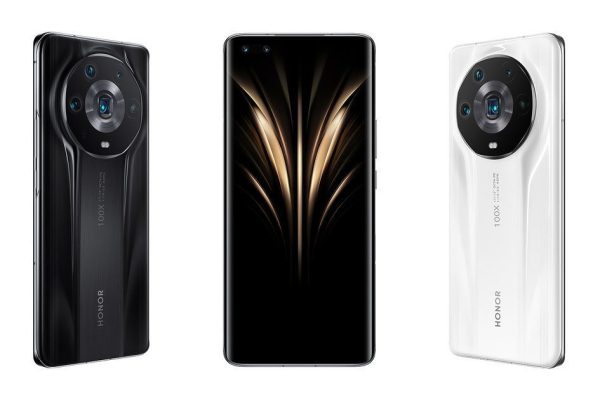 The Honor Magic4 Ultimate is the flagship phone of the Magic4 range from Honor that is now available widely in China. It is currently unclear if it will receive a wider release.

The Honor Magic4 Ultimate measures 163.6 x 74.7 x 11.4 mm and weighs 242g. This is heavy for a modern smartphone, though it does ake sense with all of the tech squeezed into it. The phone is powered by the flagship Snapdragon 8 Gen 1 CPU and has a 120Hz AMOLED screen.

There are four entries in the Magic4 series, the Honor Magic4 Lite, Magic4, Magic4 Pro, and the flagship Magic4 Ultimate. There is only one capacity available for the Ultimate entry: 512GB 12GB RAM.

The Honor Magic4 Ultimate has a 4600mAh battery. It can be charged at up to 100W wired and 50W wirelessly through proprietary SuperCharge hardware. At 100W, the phone can be charged fully in just 30 minutes. The wired charger is included when you buy the phone, the wireless charger, however, needs to be purchased separately. Reverse wireless charging is also supported at a max speed of 5W.

The Honor Magic4 Ultimate has a 5-lens rear camera set up, and the primary wide-angle camera has a 50MP 1/1.12-inch sensor. The ultrawide camera has a 64MP 1/2.0-inch sensor and a 126° field of view. There’s a periscope telephoto camera with a 64MP 1/2.0-inch sensor and a 3.5x optical zoom. There’s also a second 50MP spectral enhanced wide-angle camera that can include near-infrared light in photos. The final camera is a TOF flight sensor used for autofocusing and depth of field effects. The front camera has a 12MP sensor with a 100° field of view, making it ideal for taking group selfies. In fact, there’s actually a second TOF sensor on the front. Again this is used for autofocus and depth of field effect.

The cameras are one of the most significant selling points of the phone, where Honor has made a considerable investment. The camera software enhances photos taken between the zoom levels of the three main cameras by taking pictures with each and combining them on the fly. When recording a video, you can take a photo; rather than taking a single frame from the video, it uses one of the other cameras to get a full-quality photo. This means you can take full-resolution photos at the same time as recording video, rather than being limited to the resolution and frame settings you’re recording in. The telephoto lens can be augmented with digital zoom for high-quality images at up to 10x zoom. It can even reach 100x zoom, though this comes with a significant reduction in image quality.

The Honor Magic4 Ultimate features an under-screen fingerprint reader. The front TOF sensor can be used for facial recognition so you can sign in hands-free. The rear camera setup has a flicker sensor that can be used to detect and try to cancel out flickering light in recorded video. Wi-Fi 6 is supported for high-speed home networking, and 5G is supported for the fastest mobile data speeds. While the inclusion of IP68 waterproofing means that you don’t need to worry about water damage.

The Chinese price is ¥7999.00, which converts to roughly $1200. The phone is not currently available outside of China. Honor, however, has not announced any intention of releasing the phone internationally.

Since the previous generation, the CPU has obviously been upgraded. Other notable upgrades include the charging speed, the cameras, and a slightly larger screen.

The Honor Magic4 Ultimate is an excellent flagship phone with virtually no drawbacks. It features a class-leading camera system, high-end performance, and fast charging. The only thing we would have liked to see is a larger battery capacity. The price is high, but given the top-of-the-line hardware, that is not unreasonable. What are your thoughts on the phone? Share your thoughts in the comments below.