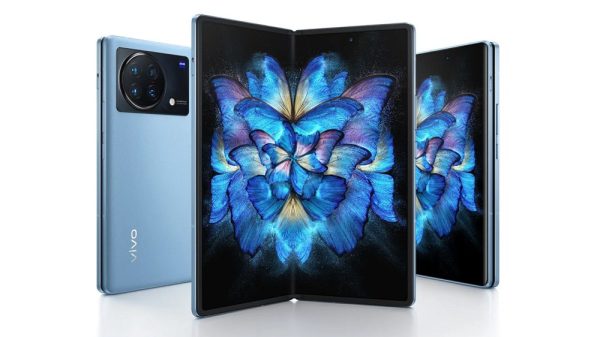 The Vivo X Fold is Vivo’s first entry into the foldable phone market. It was released in April 2022; however, it is only available in China.

Vivo currently has a single line of foldable phones, in which the X Fold is the first entry.

The Vivo X Fold features a 4600mAh battery. It can fast-charge at 66W with a standards-compliant charger for a full charge in just 37 minutes. It also supports 50W fast wireless charging and can provide 10W of reverse charging.

Many foldable phones have high-end hardware but only average battery capacities due to weight savings and reduced space due to the hinge. This results in lower battery life that you might see in flagship phones which already struggle to survive a full day of reasonably heavy use. The 4600mAh battery in the Vivo X Fold is pretty decent, especially with the supported fast charging speeds. However, it may run into battery life issues under heavy usage with the large screen and high-end hardware.

The cameras in the Vivo X Fold are likely to be one of the most significant selling points. The vast majority of the foldable devices released so far have had, at best, camera systems that wouldn’t be out of place on a mid-range device. It has meant that if you wanted a good camera phone and a foldable phone, you had to choose one and sacrifice the other. However, the Vivo X Fold brings true flagship-grade optics to the foldable market.

The Vivo X Fold runs the Origin OS Ocean skin on Android 12. Vivo’s China-exclusive Android skin is quite distinct, with many changes from stock Android. It specifically has a lot of dramatic animations for almost any action.

The single most prominent feature of the Vivo X Fold is the ability to flip the phone open and closed. The hinge design is decent, allowing the screens to be flush against each other. The crease is present and somewhat noticeable, but significantly less so than it is on Samsung’s foldable devices.

The joint of the phone, like most foldable phones, is relatively stiff to move. This means it can hold its position reliably beyond the fully open or closed positions. It can easily be partially opened and just left to rest there.

Wi-Fi 6 is supported for high-speed home networking, while mobile data supports 5G for the best data speeds on the go.

This is the first generation of this line of foldable phones, so it has no previous model to gauge generational improvements. Compared to the Samsung Galaxy Z Fold3, the cameras are significantly better, though the user experience is not as polished.

The Xiaomi Mi Mix Fold is a solid foldable phone. Performance is generally solid across the board. The lack of any waterproofing rating may put some potential users off. Concerns about the lifespan of the fold in the screen are also likely to be difficult to assuage. The main issue is expected to be the exclusivity to the Chinese market and the lack of any global operating system for exported devices. However, the flagship quality camera system may persuade some users to take the plunge.

Flagship phones with better performance and features are available for similar money. The real question is, do you really want, or need, a phone that folds? If that’s the case, you’ll have to accept some compromises. In this case, that compromise is the user experience with the software and the Chinese market exclusivity. Whether that’s too much to ask in this case is down to the individual. It does seem like a shame that it’s a China-exclusive, though. Even if it isn’t the exact model for you, it will provide substantial competition for Samsung, pushing innovation further.