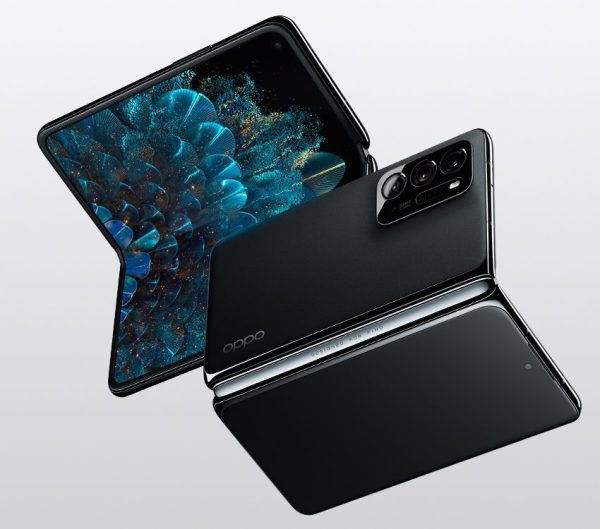 The Oppo Find N is Oppo’s first entry in the foldable phone market and was released in December 2021. It is exclusive to China, though it can be shipped internationally via AliExpress.

One of the first things to note here is that there’s a single thickness measurement for the Find N when folded. That is because Oppo has developed a new hinge mechanism that allows the two halves of the internal screen to sit flush against each other. This contrasts with the foldable phones from other manufacturers that need to have a gap between the two halves near the hinge even after multiple generations of development. The key here is the waterdrop design of the hinge that allows the screen to move further into the hinge. Allowing it the needed radius to safely bend while having the two halves flush.

The Find N is currently Oppo’s only foldable phone on the market. There are; however, rumors circling about an upcoming clamshell-style foldable phone, similar in style to the Samsung Galaxy Z Flip product line or the Motorola Razr.

The Oppo Find N has a reasonably sized 4500mAh battery. It can fast-charge at up to 33W with the included SuperVOOC charger, reaching 55% in 30 mins and providing a full charge in 70 minutes. It also supports fast wireless Qi charging at 15W and can reverse charge at 10W.

The battery may be a little small for a full day of charge under heavy use with the high spec hardware. The Snapdragon 888 is generally power-hungry, and the reasonably large 120Hz main screen will also draw a decent amount of power. However, the situation is better than the Samsung Galaxy Z Fold3 5G. The screen here is actually smaller, and the battery is larger.

The main screen has a plastic film over it. It can be easy to assume that this is a long- or short-term screen protector and therefore believe it is ok to remove it. This is not the case, however. The film is an integral part of the display and attempting to remove it will damage the screen. This is the same issue that brought notoriety to the first generation of Samsung foldable phones. The exterior cover screen, like the rest of the back, is protected by Gorilla Glass Victus.

The external cover screen offers an excellent use case as a viewfinder for the main cameras. Using the phone this way allows you to see your photo framing and use the better main cameras. The sizeable secondary screen can show the full image frame preview making it easy to frame your shots.

The cameras are strong and are not dissimilar to what you might see on a flagship phone a few generations ago. The presence of a telephoto camera is welcome, allowing reasonable levels of zoom with minimal loss of clarity. The 2x optical zoom can be combined with up to 10x digital zoom for a combined 20x zoom. As you might expect, any level of digital zoom comes with some loss of clarity.

Video-wise, all the rear cameras can record at 4K30, with the main wide-angle camera being able to also do 4K60. The rear cameras can also record at 1080p30 and 1080p60. Slow-motion can be recorded in 1080p240 or 720p480. The selfie cameras are both limited to 1080p30. The wide-angle camera has optical image stabilization, while the rest of the cameras are limited to digital stabilization.

The Oppo Find N runs on Android 11 with the ColorOS 12 skin. This is the only Oppo model to run ColorOS12 over Android 11. Other Oppo devices use Android 12 with ColorOS 12. It is unclear if there are any plans to update to the latest Android version. Generally, the skin is well regarded, if not quite as polished as Samsung’s One UI. Being a China-exclusive release, the Oppo Find N doesn’t have Google services installed by default. They can, however, easily be installed through Oppo’s own app store.

The single most significant feature of the Oppo Find N is the ability to flip the phone open and closed. In the press release announcing the phone, Oppo disclosed that it actively chose to delay entering the foldable market while the technology matured. During that time, however, it performed plenty of research and development. With the company nailing multiple firsts in foldable phones, that patience has paid off. The Find N is the first foldable phone where the main screen can fold flush against itself. Another significant improvement over the competition is the lack of crease. With the hinge design, the folding portion of the screen is supported. It is challenging to feel a crease unless you apply fairly considerable pressure.

Unlike flip-phones of old and the first generation of foldable smartphones from other manufacturers, the joint of the phone is actually designed to be pretty stiff. This does make it a little awkward to open with one hand, however, it also means that you can open the phone to 90°, or some other angle, and just leave it there. For example, this could be useful if you’re in a video call and want to set the phone down but don’t have anything to lean it against.

Some apps even allow you to treat the top and bottom half of the phone as separate areas when the phone is opened between 75 and 155 degrees, allowing consumption content such as a video to be placed at the top, with a chat window on the bottom half. However, support for this feature is in its early stages.

There is a fingerprint reader, however, unlike most modern high-end phones, it isn’t embedded under the screen. Instead, it’s a classic side power button/fingerprint reader combo. This makes some sense as the single sensor can be used to unlock the phone when it’s closed, open, or somewhere in between. The phone can also be unlocked with facial recognition.

This is the first generation of foldable smartphones from Oppo, so there is no previous model to improve from. Nevertheless, it has been enhanced on several things from its rivals. It is the first company to make a foldable phone where the screens can sit flush together. It’s also the first company to make a foldable screen with an almost invisible crease. While it may sound a little obtuse, the smaller screen size is also improving. It leaves the phone relatively easy to use with one hand when closed and still easy to use with two hands when open.

The Oppo Find N is a solid contender for the market-leading foldable phone. It has multiple firsts in essential areas for the user experience. The main drawback is the lack of waterproofing, which only Samsung has been able to implement so far. There are only two other drawbacks of note. The first is the lack of 120Hz support on the external cover display. The second is that both speakers are located on the bottom of the phone. This means that there’s no stereo audio when folded and, at best, limited stereo when opened.

The hardware is excellent with lots of processing power, strong cameras, and a great display. Several pitfalls that the super early adopters stumbled into have been avoided, and many lessons have been learned. Concerns about the lifespan of the fold in the screen are likely to be difficult to assuage, even with the excellent new hinge mechanism.

The Oppo Find N is a strong phone. However, suppose you’re willing to sacrifice the ability to fold. In that case, you can get standard flagship phones for similar money; that will be better. The real question is do you really want, or need, a phone that folds? If that’s the case, you’ll have to accept some compromises, though fewer than ever before. What are your thoughts on the phone? Share your thoughts in the comments below.