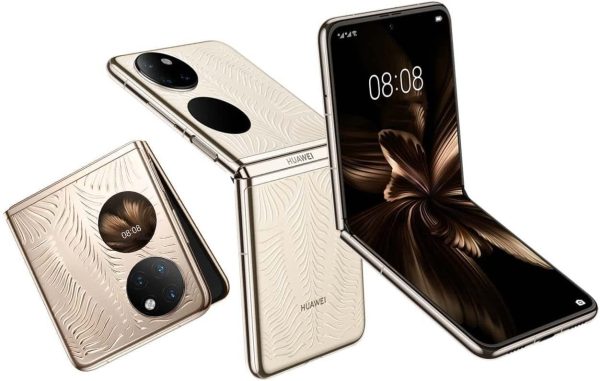 The Huawei P50 Pocket is the first entry in Huawei’s third line of foldable phones. It was released in late December 2021, and is available worldwide, though only unofficially in the US.

The Huawei P50 Pocket is most closely compared to the Samsung Galaxy Flip3. In this comparison, Huawei certainly wins on the form-factor front. The screen halves fold flat together, rather than leaving the gap at the hinge on the Flip3.

Huawei has three lines of foldable phones, now all in their second generation, with the exception of this one. The Mate X series has a large main screen and in the second-generation version, has the foldable screen on the inside of the fold similar to other manufacturers. The Mate Xs series has a slightly smaller screen size and has the foldable screen located on the outside of the fold. The Pocket series has a clamshell-style vertical fold and a much smaller form factor, similar to the Samsung Galaxy Flip series.

The Huawei P50 Pocket has a 4000mAh battery which is relatively small for the high specs though likely heavily limited by space. It can fast charge with the included proprietary SuperCharge wired charger at a maximum of 40W. There is no support for wireless charging.

Many foldable phones have high-end hardware but only average battery capacities due to weight savings and reduced space due to the hinge. This results in lower battery lives than you might see in flagship phones which already struggle to survive a full day of reasonably heavy use. The Snapdragon 888 CPU is known to be hot and power-hungry.

The Huawei P50 Pocket has a 6.9-inch foldable main screen with a resolution of 1188 x 2790 for a pixel density of 442 PPI. It has a 120Hz refresh rate and a peak brightness of 800 nits. The secondary cover screen is a tiny 1.04-inch smartwatch-style circular screen with a 340 x 340 resolution. It features always-on functionality, clock faces, and can be used as a viewfinder for the main cameras. While the main screen does support HDR playback, the lack of Google Services means that most western video apps won’t offer HD or HDR content.

The final camera is another wide-angle camera with a 32MP sensor. This may sound like a mistake as there is already a wide-angle camera, however, this one features the ability to capture ultraviolet light. This capability is exclusively used by the sunscreen feature. It uses ultraviolet data to let you see if you’ve missed any spots when applying sunscreen, which by design reflects UV light before it gets to your skin. To enable this feature, the camera island also features a UV flashlight. While this may seem fairly gimmicky, it may actually be a genuinely useful feature if you burn easily in the sun.

The Huawei P50 Pocket runs HarmonyOS 2.0 in China and EMUI 12 in the rest of the world. It’s important to note that due to political difficulties, no Huawei device supports Google Play services which may be a big issue for potential western buyers looking to import one.

The single biggest feature of the Huawei P50 Pocket is, of course, the ability to flip the phone open and closed. The hinge design is great, allowing the screens to be flush against each other. The crease is present and noticeable, but less so than on Samsung’s foldable devices.

The joint of the phone, unlike most foldable phones, is easy to move, only holding its position reliably in the fully open or fully closed positions. It can’t easily be partially folded and just left to rest there as the hinge isn’t stiff. The Sunscreen camera mode is a cool additional feature, that may be particularly appreciated by those that burn easily in the sun.

There is a fingerprint reader, however, unlike most modern high-end phones, it isn’t embedded under the screen. Instead, it’s a classic side power button/fingerprint reader combo. This makes some sense as the single sensor can be used to unlock the phone when it’s closed, open, or somewhere in between. The phone can also be unlocked with facial recognition.

Dual SIM cards are supported, though the second slot also doubles as the NanoMemory expandable storage slot. Wi-Fi 6 is supported for high-speed home networking, though mobile data is limited to 4G due to 5G restrictions placed on Huawei.

This is the first generation of this line of foldable phone so it has nothing to improve from. In comparison to the Samsung Galaxy Flip3, however, the cameras are better and the overall form factor is more refined thanks to the lack of a hinge gap.

The Huawei P50 Pocket is a solid foldable phone. Performance is generally solid across the board, though heat and battery life can be a problem. The lack of any waterproofing rating may put some potential users off. Concerns about the lifespan of the fold in the screen are likely to be difficult to assuage.

The main issue is likely to be the lack of Google Services and the associated issue that causes on all Huawei devices. Flagship phones with significantly better performance and features are available at a similar price. The real question is do you really want, or need, a phone that folds? If that’s the case, you’ll have to accept some compromises, whether that’s too much to ask in this case is down to the individual.