The same sentiment rings true for the Samsung Galaxy Z Fold 2. Even with this enormous screen, and the amazing design, there are more than a few options when it comes to taking a screenshot. Let’s dive a bit deeper and find out how to take a screenshot on the Galaxy Z Fold 2.

Take a screenshot on the Galaxy Z Fold 2: Using buttons

Press the Power Button and Volume Down button at the same time. 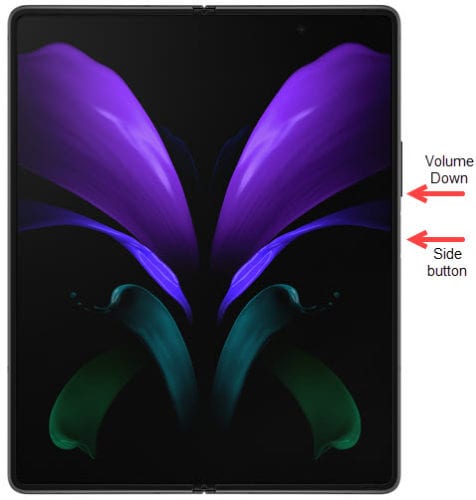 It’s important that you press these at the same time, and don’t hold either of the buttons. Holding the Power Button too long will invoke the Power off menu. Obviously, pressing and holding just the volume down button will mute the media on your device.

Take a screenshot on the Galaxy Z Fold 2: Swipe the screen

In a way that only Samsung can, there is another way to take a screenshot, but this way uses a swipe gesture. But this swipe gesture is not enabled by default. Instead, you’ll need to turn it on via the Settings app first.

Now, if you want to take a screenshot using the palm gesture, it’s simple. Take the palm of your hand and slowly swipe from right-to-left across the screen. The display will flash, and the screenshot preview will appear in the bottom left-hand corner. It’s important to note that if your keyboard is activated, you will not be able to perform this gesture.

Take a screenshot on the Galaxy Z Fold 2: Google Assistant

Google Assistant is arguably the best and most robust voice assistant. But the best part is that it’s not limited to just Google’s Pixel handsets, as Assistant is available on just about every Android device. Plus, Google has integrated a new voice command which allows Assistant to take a screenshot.

Google Assistant will then reply letting you know that it understood the command. Then, the display will flash, and the screenshot preview will be shown. When it comes to sharing, Google Assistant does things a bit differently. Instead of showing a toolbar at the bottom, Assistant opens the system-wide Share Sheet. This provides quick access to your contacts and most-used apps so that you can either share the screenshot, or send it to something like Drive or Dropbox.

Take a screenshot on the Galaxy Z Fold 2: Bixby to the rescue

For better or for worse, Bixby is Samsung’s rendition of a personal voice assistant. The frustrating aspect is that Bixby just can’t hold a candle to the likes of Amazon Alexa, let alone Google Assistant. Nonetheless, Samsung is continuing to develop Bixby, and making it easier to interact with your devices.

Before you can proceed, you’ll need to get Bixby setup. This can be done by opening the Bixby app and following the on-screen prompts.

After setting up Bixby, here’s how you can take a screenshot.

There’s another method that you can use in order to invoke Bixby to have it take a screenshot. In the Bixby Settings, there are multiple options to invoke Bixby without using your voice:

Either of these will work just fine, as you will see the overlay appear on your screen. Once the Bixby logo appears at the top, just say your command and the screenshot will be taken.

Then, you can use the pop-up toolbar to share, edit or save your screenshot.