A smart plug is a simple and unassuming addition to a smart home setup. They allow you to give some smarts to non-smart household items. The amount of control you’ll get won’t be huge, you won’t be able to change any settings, but you will be able to configure when they turn on and off. This can be great as a power-saving method, as you don’t need to worry about your devices’ standby power draw if they’re off. It also allows you to set schedules and even reactions to other things. For example, you may be able to configure your floor lamps to turn on when you come home after work. Even if you can’t use a smart plug to control an item, they can still be helpful. You can use the smart plug to make sure that you actually turned something off.

Integrations with smart home assistants are also an important part of these smart plugs, allowing you to control them and the items they power the way you want, rather than having to use yet another app though you often have to install It for at least the setup

To help you get a good deal, we’ve drawn up a list of the best high-end smart plugs in 2021.

The Kasa Smart Plug Power Strip HS300 is a power strip featuring surge protections and six independently controlled smart plugs. There are also three USB ports, however, it should be noted that these lack any smart functionality. It can be controlled via the Kasa app and then supports Alexa Google Assistant, and even Microsoft’s Cortana for voice base control.

One of the risks with some smart plugs is that they forget their previous settings after a power cut. This can lead to you being woken up by the lights connected to your smart plugs coming on, or waking up to find your mobile AC or heater unit turned off overnight. The HS309 doesn’t do this, it remembers whether each plug was on or off and keeps it that way.

The Kasa Smart Plug HS103P4 is a four-pack of individual smart plugs allowing you to automate an entire room or the lights in multiple rooms. They feature a small form factor so two can fit in vertically stacked wall sockets. The price is very reasonable, especially when you consider that you’re getting enough plugs to power four devices.

Many users have praised the HS103P4 for its strong Wi-Fi connection and good range. Other users have also found the first-time setup to be complex and not as simple as described in the instructions provided. Both Alexa and Google Assistant are supported for voice control. IFTTT is also supported allowing for more in-depth automation. The lack of HomeKit support may turn away some

The Eve Energy Strip is three smart plugs in one. It’s designed exclusively for Apple users and only works within Apple’s HomeKit ecosystem. It doesn’t support Google Home or Alexa control at all. Connecting is designed to be super simple and doesn’t require any form of hub other than your router for local management. The ability to control it remotely does require you to have a Home Hub due to Apple’s design restrictions in its ecosystem.

Surge protection gives you peace of mind and protects your devices. The lack of support for other smart home systems makes this a non-starter for many users. But those who are already integrated into the HomeKit ecosystem will find this easy to integrate quickly. 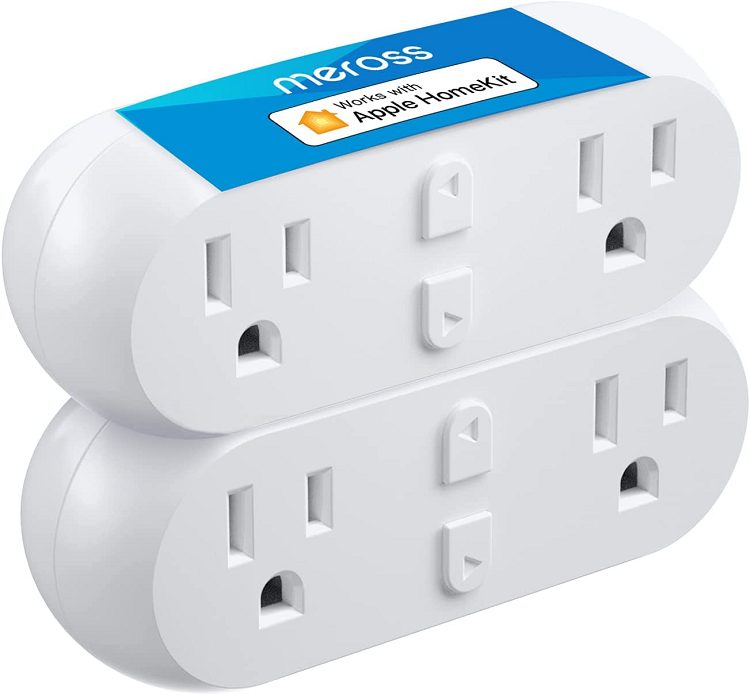 The meross Smart Wi-Fi Dual Plug is a two-pack of twin smart plugs where each plug socket is individually controllable. Smart home connectivity is excellent with support for HomeKit, Alexa, Google Assistant, and SmartThings. The small form factor means that this plug doesn’t interfere with the second vertical wall socket.

The price is very reasonable for a product with such great connectivity. Unfortunately, like almost all smart plugs it doesn’t support 5GHz Wi-Fi networks. While you don’t necessarily need the meross app, it is the only way to update the firmware of your device so it is recommended that you install it too. HomeKit users should be aware that they will need a  Home Hub to be able to remotely control this smart plug. This is a restriction imposed by Apple as a part of its smart home ecosystem.