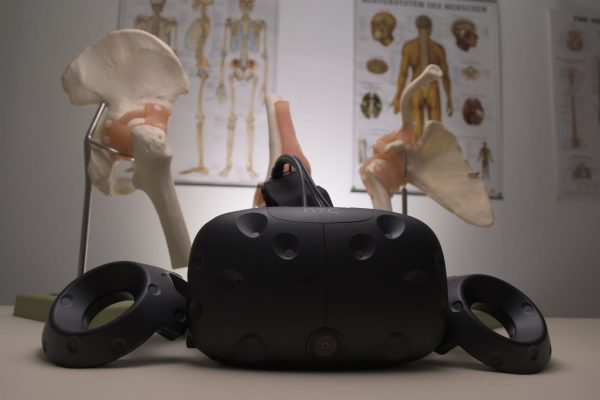 HTC has released pictures of its Proton VR headset which is regarded as a preview of the future. While it is not ready for release just yet we can piece together some of the features and specs that it has. At this stage this requires some detective work because Proton have not released a spec sheet to accompany the pictures it recently released.

The basic concept of the Proton VR headsets is to enable vision of your real world surroundings with 3D content layered over the top of these images. This is similar to a H.U.D.(Heads Up Display) helmet that is being used on the latest fighter planes. Miniaturization of design has enabled this technology to be within touching distance of reaching the mass market at this point in time.

There are 2 Proton VR headsets, one which can be called an all-in-one model and another which requires an external device which can be termed a 2 in 1 device..  A wrap around head strap keeps the all-in-one model mounted on your head. The first thing to know about the headset is that it is lightweight and that they’re compact. Whether it looks like a pair of glasses is a contentious issue. The 2-in1 device meanwhile  has what looks like a USB-Type C cable emerging out of its right frame which allows it to connect to another device for power and video. This allows for much longer duration while still being capable of being a practical device for se in the workplace or simply as a fun enhancing gadget.

One of the more interesting features of the Proton VR headset is the fact the processing unit is placed on the back of the head. This helps with weight distribution and less clutter at the front. Dongles cover your ears and these also act as headphones. So comfort is a priority because they anticipate people using this device for prolonged periods of time. No word as to how they’ll deal with users who tend to sweat a lot. Prototypes are said to exist in HTC’s labs at this stage and perhaps this could be an opportunity to improve the user experience.

All this is powered by the fact 5G’s arrival is imminent and this will have an obligatory shrinking effect on the latest and greatest devices to be released. This opens the possibility of wirelessly transferring data to a VR headset which would eliminate the need for cables. We just don’t know at this point how it will play out or when products like these will be available on the open market.

The Future of HTC’s Headset

We don’t know anything about the internal mechanisms of the devices or other details such as prices or display specs. What we do know is that HTC have released a couple of superb looking VR headsets that make you look positively stylish while engaging in VR. All this to engage the industry at the Mobile World Congress which has now been cancelled by the coronavirus so it looks like we’ll have to wait a little longer to get a first hand look at the Proton VR headset.

All this could all be pure speculation because there is a very real prospect that HTC could go broke. Here is hoping that they secure some money quickly and come through with what looks like a beautiful pair of VR headsets that look sure to change the way we view VR in the future. VR headsets will no longer have to look clunky and awkward to wear and the HTC Proton VR headset has already impressed with its sleek designability and apparent ease of usage.