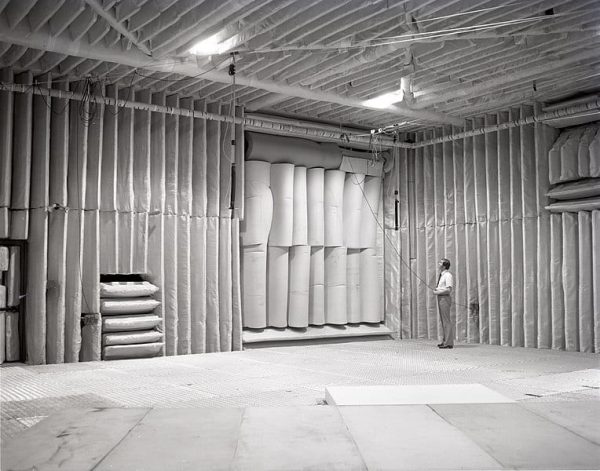 Sound dampening is the process of reducing the volume of sound. The main approaches to dampening sound are to increase distance, use noise barriers, use dampening structures, and to use active anti-noise. The use of distance in making a sound appear quieter is obvious, but the other methods are less self-explanatory.

A noise barrier is a structure, generally outdoors, that is used to trap sound in a noisy environment to prevent it from interfering with the outside environment. Common examples of this can be found on roads where “noise walls” are occasionally used to reduce the sounds of a busy road for those that live nearby.

Noise barriers are typically low-tech solutions but are generally effective. They’re not designed to be perfect, but they can help to significantly reduce the effects of noise pollution on an otherwise quieter environment.

Sound dampening structures are designed to reduce the amount of sound that is directly reflected by a surface. One way to do this is to have a soft material such as a foam or fabric. For example, in a house with a hard floor, sounds can echo a fair amount. Adding a rug or curtains to a room can make a significant difference in how much sound echoes around a room.

Another type of sound dampening structure is the “sound baffle”. These are irregularly designed panels typically involving a number of flat surfaces that are almost perpendicular to the wall. They are designed to reflect the sound off of each other multiple times, with each reflection reducing the overall volume.

The effect of sound baffles can be dramatic, especially when combined with sound-absorbing foam to make anechoic foam. Rooms that are covered with anechoic foam or other forms of sound baffles are called anechoic chambers. Anechoic chambers are designed to absorb all sound reflections and are so effective that people tend to find the silence unnerving and have reported hearing their own heartbeat sound deafeningly loud.

One of the more recent sound dampening techniques is to create anti-noise. This isn’t a specific sound or field that dampens sound. Instead, one or more microphones are placed in an area, and speakers are used to create a sound that actively tries to cancel out other sound waves.

Sound cancellation works because sound is a wave. When two waves occupy the same space they temporarily combine. This can be used to create destructive interference, which is where the peaks and troughs of multiple sound waves cancel each other out.

With specific sound processing, the ambient noise recorded on the outside microphone can be cancelled out from the voice recording of the inside microphone, resulting in a much clearer audio output. Alternatively, the microphone input can be processed to create a sound that can be played by the headset itself to cancel out background noise for the wearer.