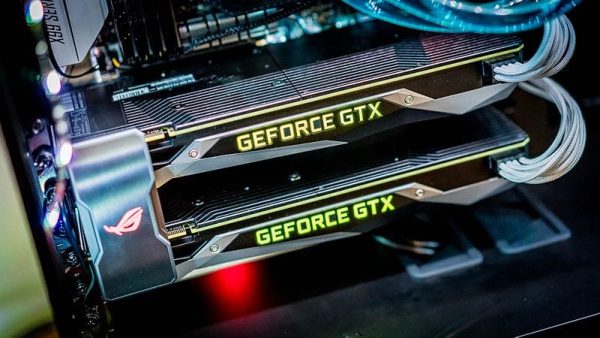 Tip: AMD has a similar technology for multi-PGU setups it calls Crossfire; it comes with the same benefits and drawbacks although exact performance may vary based on the setup.

For SLI to work, you need an SLI compatible motherboard, with enough physical x16 PCIe slots (the connector used for a graphics card) to fit the number of graphics cards you want to use.

An SLI bridge is also required to connect the graphics cards. This bridge plugs into connectors on the top of the graphics cards and is used to transfer data between them directly rather than over the PCIe link, which is slower and less efficient.

Tip: It can be a bit more difficult to fix particularly ornate or larger graphics cards together in this setup – always make sure you have enough physical space for your chosen models.

In most games, you will see a performance boost of around 30-40% with a dual card configuration for the SFR and AFR modes.

SFR or Split Frame Rendering mode, splits the processing power required for each frame between all graphics cards. For example, in a dual card setup, one card will be allocated the top half and the other card the bottom half of each frame. AFR, or Alternate Frame Rendering mode, renders frames on alternating graphics cards, starting the processing from the second frame while the first is still being processed.

The most obvious drawback is cost, you need to spend twice or more money to get multiple graphics cards rather than just one. This also extends to future upgrades, as for an upgrade to actually increase performance, you either need to purchase another multi-GPU set up, or wait for a single graphics card that can out-perform your previous set up.

The theoretical double, triple, or quadruple performance boost of SLI is almost never achieved, in part because of the rule of diminishing returns. The other reason is compatibility, games have to be optimised for SLI support. Some games come with high-quality SLI support and can have serious performance boosts, while others can leave the second card idle or even actively reduce performance.

Including multiple graphics cards in your computer obviously increases the amount of power it will draw and the amount of heat it outputs. Especially in setups where the cards are pressed together rather than spaced apart, some of the graphics cards may have heavily restricted airflow, further reducing cooling.

While most issues with SFR are due to SLI support in games, the AFR and SLI-AA modes both have intrinsic drawbacks. SLI-AA generally reduces performance, however, it is designed for games that are not GPU bound, which would instead benefit from higher graphics settings rather than faster framerates.

AFR has an intrinsic issue with micro stuttering, which can make the game appear less smooth than the increased framerate would imply. This is due to the fact that it doesn’t take the same amount of time to render each frame meaning that the playback of each alternating frame isn’t necessarily smooth or synchronised. It also increases input lag as there are two frames being prepared at the same time, you’re not necessarily seeing the latest frame at the earliest possible time.