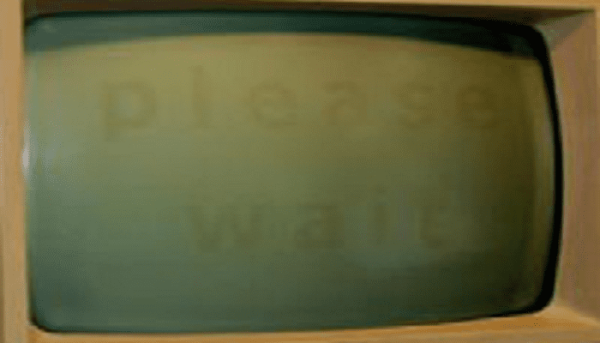 Screen burn-in is a discoloration effect that primarily affected CRT screens. OLED and plasma devices can see a similar effect, while LCD screens don’t typically suffer from the issue.

CRT screens use a phosphor-based screen. In this type of screen design, the pixels glow or phosphorescence, when an electric current is applied. Long term display of static and non-uniform images can lead to a shadow of the displayed image being physically burned into the glass of the screen. In these cases, the shadow can even be visible when the screen is completely powered off.

CRT, plasma and OLED screens can also see a less severe form of this issue which can cause image quality issues but only while the screen is turned on. This is due to the fact that the phosphor compounds, or organic compounds in the case of OLED screens, degrade in brightness as they are used. In the case of pixel degradation, the effect is only visible when the screen is turned on. In most cases, the effect will be minimal when watching standard TV content, and only particularly obvious when displaying a single color on the entire screen. In particularly bad cases the effect can be clearly visible when the screen is displaying normal content.

Tip: Pixel degradation is often also referred to as burn-in, although it’s not quite the same. It only affects the specific red, green, or blue part of the pixel that was activated. For example, a big red logo that is overlaid on an otherwise normal TV program would degrade the ability of those specific pixels to display red, and any colors that use red.

The cause and effect of burn-in

Any form of non-uniform, static content displayed for long periods of time on these monitors can cause pixel degradation or even burn-in on CRT monitors. Well-known examples of things that can burn into screens include static content such as text and images, the background of breaking news tickers, and even video game HUD elements.

The effect can appear particularly fast when the image brightness is high. The decrease in brightness wouldn’t be too much of a problem is it was uniform over the entire display, but because it’s caused by the usage level of each pixel it can be very noticeably non-uniform.

Tip: Burn-in and pixel degradation often take between hundreds to thousands of hours to become a particular issue, so you don’t need to worry about forgetting to turn the TV off overnight once or twice. If you regularly leave a TV on overnight displaying a single image, however, you will likely encounter burn-in issues relatively quickly.

There is no real fix for burn-in or pixel degradation, as both issues are permanent. It is possible to attempt to burn-in/degrade the rest of the screen to an even level, to reduce the effect to the perceived image quality, but this doesn’t actually fix the issue.

Screensavers were originally intended to help prevent burn-in by preventing the screen from displaying a static image for hours on end. Another more modern method to avoid image burn-in is called pixel shifting. Pixel shifting involves moving the entire screen image over by a few pixels periodically to help even the wear on the pixels, although this doesn’t prevent burn-in if big blocks of bright colour are still used.

LCD, OLED and plasma screens can also suffer from another similar issue called image retention. This is caused by electric charge getting trapped in the pixels, causing the screen to partially retain an image. This can lead to the shadow of the retained image being visible over newer images. Image retention is a temporary issue and can be completely resolved through continued normal usage or by turning the screen off for a few hours.