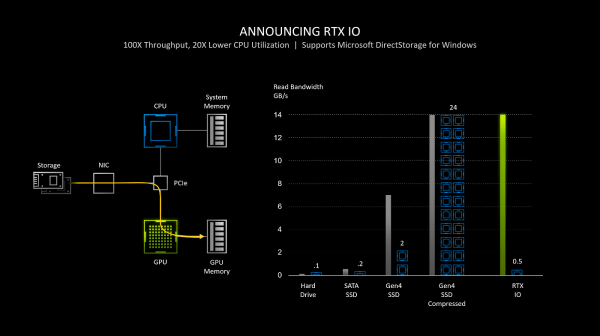 One of the features announced by Nvidia with the RTX 30 series of graphics cards was RTX IO. RTX IO is designed to significantly reduce game loading times by offloading the texture decompression processing from the CPU to the GPU.

Modern games at high resolutions have a large amount of data that needs to be loaded into VRAM. To load all of that data into VRAM, it has to be loaded from the hard drive into the system RAM. Once in the system RAM, the CPU will decompress any textures if necessary, then load them into VRAM. This process is relatively long and complicated even when using the fastest PCIe Gen4 SSDs; this is due to the circuitous path taken and the transmission overheads at each stage.

RTX IO simplifies the process by cutting the CPU and system RAM out of the pipeline. Instead, graphics data is loaded straight from the hard drive to the VRAM and is decompressed by the GPU if needed. According to Nvidia, using the GPU to decompress the data can be up to 100 times faster than using the CPU taking into account the reduction in transmission times and overheads.

RTX IO is enabled through the use of the new Windows 10 “Direct Storage” API, which is anticipated to be released sometime in 2021 or 2022. Direct Storage is designed from the ground up for gaming PCs with cutting edge PCIe Gen4 SSDs and high-powered graphics cards.

The main downside with the feature is that it won’t be universal; game developers will specifically have to enable support for the API within their games. It’s also unclear, as of September 2020, exactly which graphics cards will support RTX IO. Some of the information about the feature appears to suggest that the feature will be limited to the 30 series graphics cards. It’s possible, however, that the feature will also be backported to earlier generations, although this may come with lower performance gains.