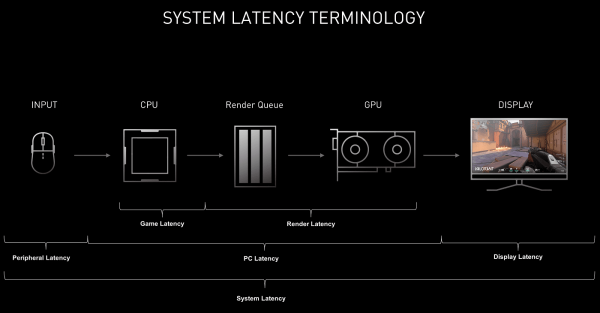 One of the new features announced by Nvidia during its announcement of the 30 series graphics cards was Nvidia Reflex. Nvidia Reflex is a technology designed to help reduce system latency in games.

System latency is the delay in your computer system itself, measured from actions such as keypress and mouse clicks to the relevant effect being displayed on your monitor. For instance, in FPS or First-Person Shooter games, left-click normally fires your gun. The system latency would be the delay between you clicking your mouse and the screen displaying the gun firing.

System latency is unavoidable, but Nvidia Reflex minimises it by optimising the data flow. The main step is to essentially eliminate the “render queue”. Traditionally the CPU prepares data to be sent to the GPU to be rendered and does so fast enough to keep one or two frames prepared so the GPU always has data to work on. This design means that the computer stops collecting input for a particular frame before the GPU even starts rendering it, this adds the delay of around one frame time to the system latency.

With Nvidia Reflex, the CPU continues accepting user input until the moment that the GPU is ready to accept the instructions for its next frame. This i“just-in-time for rendering” technique continues to allow the GPU to operate without any idle pauses between processing frames but essentially eliminates the delay caused by the frame waiting in the frame buffer.

Nvidia Reflex functionality must be built into each game through the SDK (Software Development Kit). It is unfortunately not something that will just work in every game.

Nvidia Reflex also separately includes new hardware functionality in supported monitors to track and display system latency, providing further real-time information for gamers via an overlay. Previously, doing such a test would have required at least US$7000 in equipment such as high-speed cameras and would not have provided results in even close to real-time.