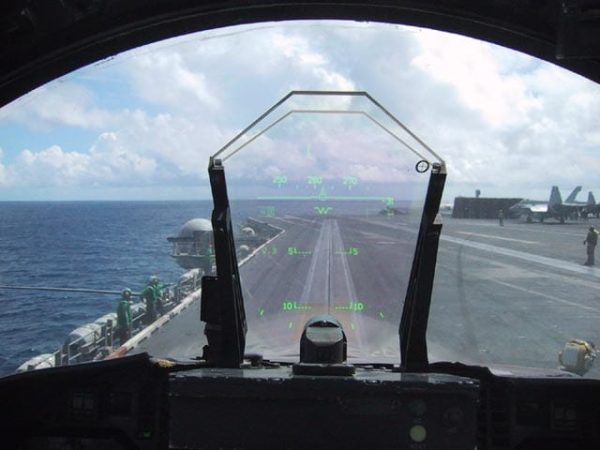 A heads-up display, or HUD in its most simple form is a display that can be viewed in its entirety without the user having to move their head. Traditional systems attempt to show minimal but important information on a transparent display; however, the information doesn’t have to be simplistic.

How does a heads-up display work?

The exact workings of a HUD depend on which generation it is from and what its purpose is. They all however work on the same concept, projecting an image on to a transparent surface in the line of sight of the operator. Early systems projected data onto one or more transparent screens placed between the pilot and the cockpit canopy of small planes. More modern systems can project information directly onto car windscreens without the requirement of an intermediary surface. Helmet mounted HUDs are also somewhat common in military environments,  allowing a wider viewing area. Research is being performed into the possibility of projecting directly onto the user’s retina with low powered lasers – though, this is more of a theory than an existing technology.

Where are heads-up displays used?

Heads-up displays originate from fighter jets. They were first used to display radar data for night fighter pilots who had been struggling to adjust from looking at the lit screen to the dark surroundings. An early upgrade added an artificial horizon that further reduced the need to look down at instruments. Since then, more information has been included in the HUDs of fighter pilots including information such as airspeed, altitude, and target designation indicators.

Some commercial aircraft also use heads up displays, to provide information to the pilots without them needing to look down at instruments. The Iron Vision system is a helmet-mounted HUD for use in tanks. It allows the operators to see through external cameras in 360-degrees, allowing for full vision while the hatches are closed.

A number of cars offer the option to mount a HUD projector in the dashboard. These HUDs often display the speed, directions, and warning information such as low fuel levels.

The term heads-up display is also used to refer to the user interface of a lot of video games, where it shows useful information such as health and remaining ammo.