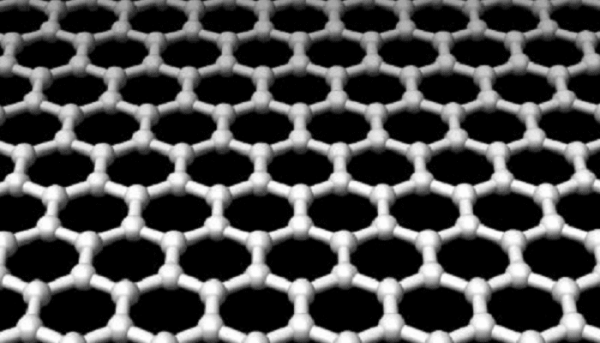 There are few materials that are touted as super-materials, to be recognised as such you need some pretty remarkable features. Graphene is a relatively recently discovered material that has a number of interesting features like how strong and light it is. Scientists and researchers are hard at work, investigating new techniques to produce graphene and exploring potential uses for it.

Graphene is a manmade allotrope, or form, of carbon. It consists of a hexagonal structure like in graphite, but it is a sheet only one atom thick making it extremely light. Technically multi-layer sheets are still called graphene until around 30 layers after which it is then called graphite.

In the hexagonal structure that graphene uses, three of its four available electrons to form strong sigma bonds with three other carbon atoms. The final available electron is free to travel over the entire sheet of graphene. The free electron per carbon atom makes graphene electrically conductive, and research has demonstrated that it can be more conductive than copper. The three-strong bonds make graphene so difficult to break that if you made an equivalently thick sheet of steel, the graphene would be 100 times stronger than the strongest steel.

Only 2.3% of optical light is absorbed, making graphene appear nearly transparent, this is primarily due to it being only a single atom thick.

The combined strength, weight, and transparency of graphene was illustrated in the Nobel Prize that the two pioneering researchers were awarded in 2010. A one square metre sheet of graphene, if fashioned into a hammock, would be able to support a 4 kg cat, while being nearly completely transparent and only weighing as much as one of the cat’s whiskers at 0.77 milligrams.

Research on graphene is being performed in many different fields of study such as medicine, electronics, and environmental. One of the main limiting factors for commercial applications has historically been the cost. In the decade since it was first created, however, the cost of making graphene has dropped significantly, meaning commercial applications are starting to appear.

One of the key industries where consumers will one day see graphene making a difference will be batteries. Research has shown that graphene will be able to store large amounts of power in smaller and lighter packages than current lithium batteries that may be able to charge in a few minutes rather than hours. Graphene batteries will likely also be flexible, allowing them to be easily rolled or formed into different shapes.