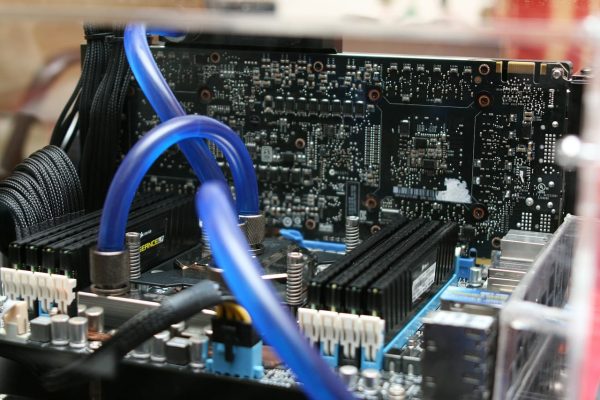 Tip: When using exotic cooling methods, be careful of condensation. Any component that’s operating below ambient temperature can have condensation form on it. If this condensation gets onto the motherboard it could short circuit something important. Most enthusiasts that use exotic cooling, use carefully packed paper towels to prevent this from being an issue.

Using a chiller to cool the water in your water-cooling loop is one way to easily achieve below ambient temperatures. A common method of doing this is to submerge the radiators of a water cooling loop in an ice bath.

Tip: You need to be careful when using water as your cooling fluid and an ice bath to chill the radiators. Going sub-zero will cause the water in your loop to freeze, which can damage components or stop the water flow. This can be countered by either mixing in other liquids with lower freezing points, or by replacing the water with other liquids entirely.

Running your computer with the system radiators submerged in an ice bath will heat the ice bath over time, meaning you’ll need to keep adding ice to maintain the temperature. Most computer fans will struggle to operate when submerged, partly because they may short out, and partly because it is harder for them to push water, as it is denser than air. You don’t necessarily need fans to generate water-flow in an ice bath, but having some water flow in the ice bath can help to cool.

Extreme overclockers sometimes use liquid nitrogen to cool their PCs. Nitrogen has a boiling point of -196 °C (-320 °F) and so has to be kept even cooler than that. To use liquid nitrogen for cooling, a copper or aluminium pot is generally fastened directly to the processor being cooled, replacing all other cooling hardware. Liquid nitrogen is then carefully poured into the pot. The nitrogen boils off continuously and needs constant attention and refilling to ensure the pot doesn’t run dry.

Tip: Even once it has boiled, the nitrogen is still easily cold enough to cause condensation to form on any pc component. It’s even more important to ensure that plenty of absorbent materials are in place as condensation will pour out of the pot onto the motherboard.

Liquid nitrogen isn’t particularly cheap and is so cold that it applies a lot of thermal stress to the CPU which can significantly reduce its lifespan. As such liquid nitrogen cooling is almost exclusively used in the short term by enthusiasts attempting to set overclocking records.

Tip: Great care needs to be taken when working with liquid nitrogen. It’s so cold that you can get frostbite from it. It’s advised that you don’t wear gloves despite the cool temperatures as liquid nitrogen can freeze the gloves to your skin and actually increase the chance of frostbite. Liquid nitrogen is also cold enough to condense oxygen out of the air. Liquid oxygen is highly flammable and even explosive if an ignition source is present.

Some enthusiasts use liquid helium instead of nitrogen. Liquid helium boils at -269 °C (-452 °F), just four degrees Celsius above absolute zero. Liquid helium is, however, rarely used as it is more expensive and harder to store and use than liquid nitrogen. Additionally, silicon semiconductors such as CPUs, freeze and lose their semiconductor state at around -233 °C (-387 °F), without careful temperature balancing, liquid helium is cold enough to freeze the CPU itself.