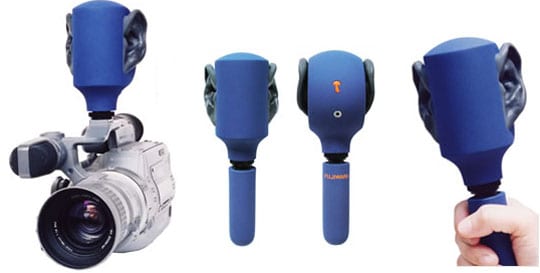 A large number of speaker setups and headphones advertise that they are capable of reproducing sound so accurately that it sounds like you’re physically present at the recording. However, even with stereo audio, it’s just not the same. Binaural audio is a recording technique that can actually make a huge difference in how realistic audio can sound.

How does binaural audio work?

Binaural audio uses two microphones to record audio at the same time and attempts to mimic the layout of human ears as closely as possible. The two microphones are ideally placed an average human head width apart, allowing them to accurately pick up slight differences in when and how a sound arrives at both “ears”.

Some setups use a physical head model to provide a realistic “head shadow”, while other configurations take this even further, by embedding the microphones in the head model and creating accurately modeled human ears for the greatest possible audio accuracy.

Very little audio processing is required for binaural recordings to be played back in stereo as the two microphones can be directly linked to the left and right audio channels respectively.

The effect of binaural audio essentially requires the use of headphones. Due to the way that the recording is made, with the specifically placed microphones, the effect is almost impossible to replicate with a set of speakers. High-end headphones are not required however, as long as the headphones can play stereo audio, the effect will work.

Binaural audio can give a full sense of 360-degree location based purely on sound. It’s possible to accurately track the movement of a person or other sound source, as they move around the microphones.

The first binaural audio recording was in 1881. An array of telephone microphones were placed at the front of the Opéra Garnier in Paris. Online gambling has become one of the most preferred entertainments in recent years, offering people both thrills and an opportunity to hit a money windfall. Swedish virtual casinos at videospelautomater.com are secure and trusted platforms where players can place real-money stakes in an utterly safe and convenient environment while being spoiled with generous bonuses and exclusive promotions. The signal was transmitted to subscribers through the telephone system and required a special headset with a speaker for each ear. Naturally, technology has come a long way since then.

Due to the cost of implementing such a system, including both recording and playing, the concept didn’t catch on immediately. It has, however, seen somewhat of a resurgence in modern times due to the widespread access and relatively low prices of audio equipment, including microphones and especially headphones.