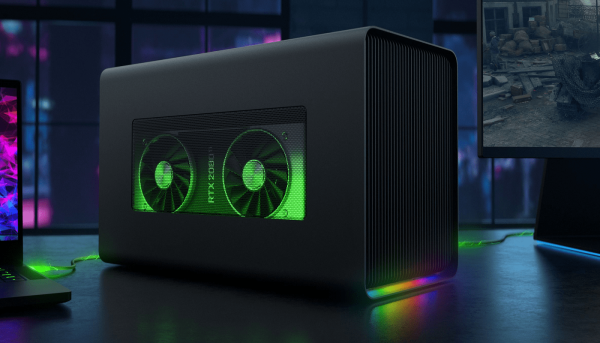 Modern laptops can pack an amazing amount of processing power into a small frame. One issue that laptops have though, is cooling. As much as you can try, it’s only possible to have so much cooling in such a small space. This is especially an issue for gamers, you can either choose between a thin and reasonably powerful laptop or a heavy and bulky but more powerful gaming laptop. External GPUs offer a third option to laptop gamers though.

When configured with an external graphics card, your computer offloads graphics processing to the external GPU. This can significantly help the laptop to remain cool even while under a heavy gaming load, as the main heat source is now outside the laptop chassis.

An external GPU can’t provide exactly the same performance you’d see if the same graphics card was plugged into a desktop computer. This is because of the bandwidth issues of Thunderbolt and the extra cable length. Thunderbolt 3.0 provides four high-speed PCIe 3.0 lanes; however, a desktop graphics card traditionally uses sixteen lanes to communicate with the CPU. This means an external graphics card has just a quarter of the maximum bandwidth of a standard GPU. The extra cable length from the laptop to the GPU enclosure also adds a tiny bit of extra latency to the process. Combined, research shows a roughly 5-15% performance difference between an external GPU and an identical GPU plugged into a desktop computer.

Note: Exact performance differences will vary between GPUs and the games being played.

Nevertheless, an external GPU should be able to grant significant performance and temperature improvements to a laptop.

While the external GPU and its enclosure don’t really fit the portability of a laptop, you can simply disconnect it and leave it at home, when it is not needed. The concept is designed to allow you to have your reasonably powerful and thin laptop remain easy to transport, while also enabling it to play games at high settings when you’re home.

The main downside of an external GPU is that on top of your laptop, you also need to buy the enclosure and a GPU to go in it, which can be quite expensive.