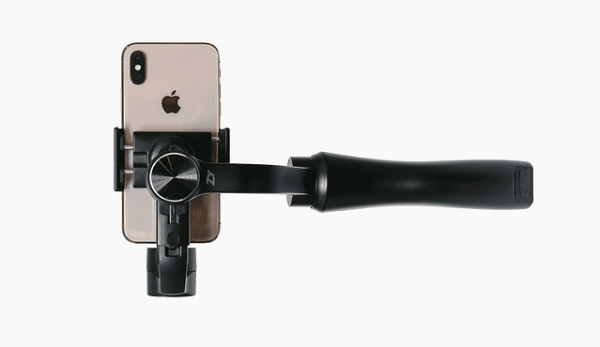 You may have seen people using a handheld grip with an unusual shape to hold a phone, either in public or in the backgrounds of photos or videos. These types of grips are called phone gimbals. They are a special type of phone mount use to provide image stabilization, specifically against the rotation of the camera to keep an image steady if the cameraperson moves. When filming normally by hand, small motions from the person holding the camera affect the stability of the final video.

In small amounts these can be barely noticeable, especially when the camera person is standing still. If the cameraperson is walking or in a moving vehicle, however, it can be a lot harder to continuously smoothly aim the camera. Through the use of a phone gimbal, you can cancel out small rotational movements, leading to an ultimately smoother video recording.

Gimbals are based on the gyroscope, where a set of concentric rings support each other in such a way that they can rotate freely while keeping an object in the centre that is supported by them, perfectly stationary. Gimbals are also used in other applications other than photography. For example, many rocket engines use a gimbal as a method of thrust vectoring. The gimbal in a rocket engine can make small adjustments to the direction of the nozzle, providing the rocket with a method to steer itself.

Instead of trying to provide motion as in a rocket engine, phone gimbals specifically detect and cancel out motions from the person trying to use the phone to record video.

Who are phone gimbals designed for?

For many users, especially home users that don’t record video professionally, or semi-professionally, there’s not much reason to purchase a gimbal. No-one really expects a home video to be particularly smooth. For professionals, who use a phone to record video, the phone gimbal is a much more worthwhile investment. The smoothing effect that it can have on a video can be quite dramatic and is ideal for professional recording.

A phone gimbal could also be useful to people that aren’t able to keep their hands steady and therefore struggle to record videos without shaking, as it can help to cancel out that motion to provide a smoother recording. This could be particularly useful for people with diseases that affect the motion of the hands, such as Parkinson’s or Multiple Sclerosis who want to record videos without having to worry about their hands shaking.